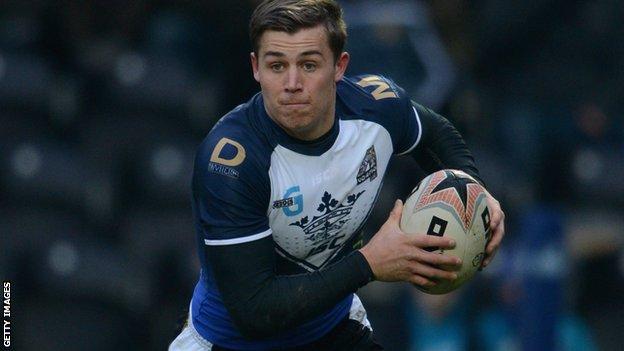 Widnes's Kevin Brown was sent to the sin-bin early in the second period and the Vikings defence could not cope as Hull ran in seven more tries to complete a convincing victory.

Hull had lost their five previous Super League matches but burst into life when stand-off Holdsworth, the Airlie Birds' star man in their thrilling ran the length of the field to cross and give Danny Tickle the easiest of conversions.

Widnes replied within a minute of the restart through Cameron Phelps, before the sides again traded tries.

I was embarrassed to be associated with that. I just didn't see it coming. It looked like we gave up at times

The home side had captain Gareth Ellis to thank as the second-rower laid on easy tries for Briscoe and Yeaman either side of a Kevin Brown score.

As the half-time hooter approached, youngster Shaul - starting in place of the injured Shannon McDonnell - scored two classic full-back tries, firstly going under the posts after arriving from deep to take Briscoe's pass from dummy-half 40 metres out, and then capitalising on some neat interplay from Jay Pitts and Richard Whiting.

The second half was a total domination from Hull, as after Tickle kicked an early penalty goal to stretch the lead to 20 points, the Widnes defence were unable to cope following the sin-binning of Brown.

Winger Briscoe burst clear moments after Brown had been sent from the field, and when faced with a one-on-one, he unselfishly allowed Jacob Miller to score his first of two tries in five minutes.

Briscoe completed his own brace soon after following another 50-metre dash, this time unopposed to the line.

Hull grabbed another when Whiting took the ball from a 10-metre scrum, and as Widnes tired, they allowed Aaron Heremaia in on the action, before Joe Arundel was the beneficiary of a wonderful Joe Westerman pass to complete a thumping victory for the Black and Whites.

Peter Gentle's side hold the final play-off spot and are three points clear of their closest challengers Wakefield, who lie ninth with five matches of the regular season to play.

"It was very important to back up what we did in the Challenge Cup competition.

"You can't block out the cup final [against Wigan on 24 August]. It's a great achievement but we needed to bring that form into the league and tonight we did that.

"I thought Jacob Miller's best performance was last week, and now I believe he has built on that tonight, but as a team we have still got a few things to work on, which I know sounds silly.

"I was embarrassed to be associated with that. I just didn't see it coming. It looked like we gave up at times.

"We made it comfortable for them. We have to swallow it and be embarrassed, not gloss over it or look on the positives.

"They've spoken some harsh words to each other but that has just blown us completely back.

"It looked like they gave up at times and it was embarrassing."