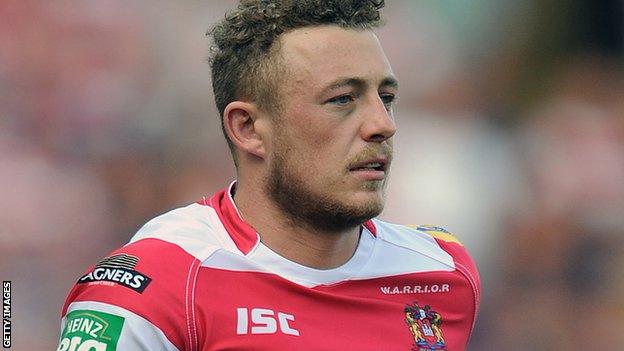 Wigan Warriors returned to the top of Super League with a controversial win against Hull KR at the DW Stadium.

Josh Charnley scored two of Wigan's four tries, although his second effort and Darrell Goulding's first-half score could easily have been ruled out.

Anthony Gelling's try and a Matty Smith drop-goal put the result beyond doubt.

Earlier, Greg Eden and Michael Dobson had deservedly put Rovers 10-4 ahead but Wigan hit back in the second half to replace Huddersfield at the summit.

However, the Giants are just a point behind the new leaders and will return to top spot if they beat Salford on Sunday, before the Warriors and Huddersfield face each other on 9 August.

Josh Charnley had a loan spell at Hull KR in 2010, scoring five tries in five games for Rovers.

but put on a much better show on this occasion.

It took 13 minutes for the hosts to register their first points and unsurprisingly it was the division's top try scorer Charnley who did the honours, running in unchallenged from close range to score his 28th of the Super League season and his 101st in the cherry and white of the Warriors.

From the resulting restart, Smith carried the ball out of play, the Warriors were penalised as Rovers broke forward, and skipper Dobson set up full-back Eden to cruise over.

Wigan, fresh from their in their Challenge Cup semi-final six days earlier, were below par in the first period.

Their cause was not helped by the loss of Sean O'Loughlin to a calf injury before the break, and with Wigan's captain off the field, Dobson streaked through their off-colour defence to touch down in the corner.

What can I say about that try? Everyone saw it, you saw it, I saw it - and my eyes are pretty poor. One day the bounce of the ball will go our way

But Shaun Wane's side would be level at the interval, although the move that led to Goulding's well-worked score began with referee Richard Silverwood judging that Eden had been guilty of a forward pass as Hull KR sought to extend their lead.

Smith's smart crossfield kick was collected by winger Charnley and he offloaded to the centre, who crossed with ease as the hooter sounded.

Lincoln Withers, an early replacement for Jordan Cox after the Rovers second-rower had been hurt in a tackle on Scott Taylor, was sent to the sin bin for holding Ryan Hampshire on the floor.

Now playing with an extra man, Wigan took full advantage, but there was more controversy surrounding Charnley's second try of the game.

Television replays appeared to show the ball had made contact with the corner post before it was grounded beyond the whitewash, but TV official James Child awarded the score.

The visitors, who had won five successive Super League matches before two weeks previously, saw David Hodgson's effort correctly ruled out because the winger had a foot in touch.

Wigan centre Gelling crossed late on to stretch the lead to 10 points, an advantage Smith extended further with a one-pointer, and although Evarn Tuimavave dived over for a late Rovers try, the Warriors held on for victory.

"I told the players what thought [at half time]. But they are honest, the players. They knew they didn't perform in that first half.

"We showed a lot of character. We weren't at our best, far from it, but to get two points against a really talented Hull KR team was a credit to the players.

"The manner in which we won was a little bit disappointing for me. We were missing some important players but I still expect us to perform better than that. It is not acceptable at this club.

"Some of our errors today were very uncharacteristic but we will have a good week and I do expect improvement."

"I can't comment otherwise I'll be copping a fine.

"What can I say about that try? Everyone saw it, you saw it, I saw it - and my eyes are pretty poor. One day the bounce of the ball will go our way."

And his thoughts on the game:

"It has been frustrating not being able to get a full-strength team on the park but tonight I was very pleased.

"If we can fix up our discipline and make those penalty counts more even, we'll be in the reckoning with more teams."