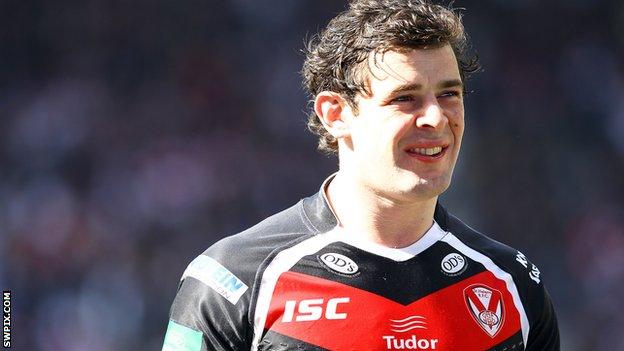 The Saints led at the break thanks to tries from Francis Meli and Tommy Makinson, Morgan Escare replying for the Dragons.

Makinson touched down for his second try before Wellens crossed to put the visitors in total control.

With time running out Wellens went over again to give Saints a convincing win.

The visitors took the lead when Meli touched down after good attacking play and added to their advantage through Makinson's score from Lomax's pass.

Paul Wellens' double means he is now up to 999 points in his 400 Super League appearances for the Saints. He made his debut for the side in 1999.

Following Makinson's try the game was held up while Saints half-back Gareth O'Brien, who had earlier converted Meli's score, received lengthy treatment after being taken out off the ball by Zeb Taia in the build-up. The man on loan from Warrington was eventually carried off on a stretcher with the Frenchman being placed on report.

After the restart Escare got the French side on the board with a well taken try after some strong running.

The hosts ended the half on top but the Saints defence stood firm and Steve Menzies fell just short of the line moments before the hooter.

Nathan Brown's side re-asserted control over the game after the break when Makinson got up superbly to collect Wellens's high kick.

Wellens got himself on the scoresheet from Anthony Howarth's pass with the hosts down to 12 men after Antoni Maria had been sinbinned.

The Dragons' frustrations were growing and Michael Simon sparked a melee after throwing a punch at Alex Walmsley, referee Ben Thaler ultimately sending Maria and Louie McCarthy-Scarsbrook to the sinbin.

Shortly after Leon Pryce wasted a great opportunity to get the hosts back into the game Wellens ran in his second score to put some gloss on the win as the Saints comfortably held out.

"I've let the match commissioner know what I think about the tackle at half-time. I thought it was nothing short of disgraceful.

"I find it absolutely downright rude and disgraceful that they (the RFL) don't protect the players in the game, in particular the small ones, who are the key players.

"It's just shocking. If one of my own players did it, I'd expect them to be sent off and then be suspended for a long, long period of time. Are we going to wait until some kid gets a broken neck or a broken jaw before the RFL act on it?"

"I will have to look at it again, but at the end of the day if it is a shoulder to the head then I'm sure the RFL will give a punishment.

"I'm on the same page as Nathan, but I don't want us to cop a ban now and the others over previous weeks haven't copped it.

"It will be interesting to see what happens. I have to see the images again, but I'm not sure Zeb tackled the head."