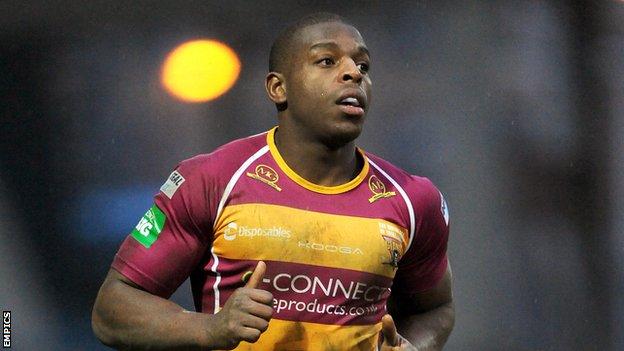 Huddersfield Giants hammered Salford City Reds to go back to the top of Super League.

The hosts were 28-0 up at the break thanks to tries from Jermaine McGillvary (2), David Faiumu, Brett Ferres and Joe Wardle.

The teams exchanged tries at the start of the second half, Danny Brough going over for the Giants and Niall Evalds touching down for the Reds.

Jamie Cording ran in two tries late on to complete the scoring.

The Giants travel to Wigan on Friday, one point ahead of Shaun Wane's side. Huddersfield beat the Warriors 22-16 at the start of the season.

The Giants got off to a dream start with McGillvary converting from Scott Grix's kick inside two minutes.

It was 10-0 inside the first five minutes as the same player got on the end of wonderful work from Brough before the Scottish international landed the kick.

With the game threatening to turn into a rout the Reds improved their defence to keep the hosts out until just before the half hour mark when Faiumu showed good footwork to go over and Ferres charged in just moments later after Lee Gaskell had kicked the ball dead on the restart.

Wardle added to the lead when Ferres fed him after breaking through and Brough landed the kick to leave the Giants 28-0 up at the break.

Brough touched down for the first score of the second period before the Reds avoided a whitewash when Evalds scored from Marc Sneyd's kick.

Normal service was quickly resumed as the Giants made the most of a penalty to allow Cording to go in between the posts before the same player ran in again after concerted pressure.

Paul Anderson's side replace Wigan Warriors at the top of the table ahead of their meeting on Friday.

"With the scoreline the way it was we took a few precautions.

"Eorl Crabtree had a tightening in his back and we looked after it. It was the same for Brett and it gave opportunities for others to get some game time.

"We didn't finish as many opportunities as we'd have like and collectively we let each other down at times.

"Salford also had nothing to lose. They had a dig and made it hard for us. But we're top of the league and so can't grumble too much."

"It was a tough day at the office and clearly the best side won.

"I was, though, particularly impressed with Jordan Walne. Giving players like this exposure to Super League is very important.

"They learn what Super League's about and what it's like to play against a top team and the level of physicality needed to compete at the top level.

"Up until this point, when we copped for injuries and suspensions, our form's been pretty good. And when we do the things we need to do, we look a good side.