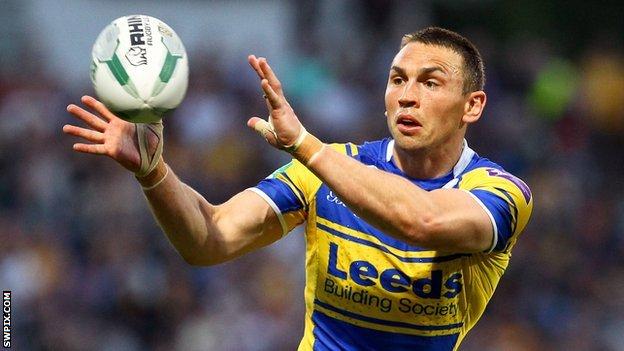 Leeds Rhinos and England captain Kevin Sinfield has admitted he is surprised to have reached his 500th career game.

The 32-year-old is set to reach the landmark in Thursday's Super League match against London Broncos.

Sinfield, who made his debut aged 16, has led the Rhinos to six Grand Final wins during his 456 club appearances.

Since making his Leeds debut against Sheffield Eagles in 1997, Sinfield has made 499 career appearances comprised of:

"I was really surprised when someone said how close I was to it, I probably remember about five matches," he told BBC Radio Leeds.

"I made my debut the day after I got my GCSE results and I was just a boy coming into a man's game.

"It's something I'm really proud of and I enjoy every day. It's never been a job for me and when you enjoy it as much as this, it's easy to keep going. I feel very lucky."

The Oldham-born loose forward is in his 11th year as skipper of the Headingley side and will lead England into autumn's home World Cup.

He became the club's record points scorer last year and says his next aim is to reach 500 matches for the Rhinos.

"I remember when Keith Senior got to his 500th game and I know there's not that many that get there," he added.

"I still think there's a lot more life and a lot more games left in me and it's not about quantity but quality of games.

"I think what John Holmes did in playing over 600 games for Leeds will never be touched. I'd love to reach 500 games for this club, that would be huge for me. It's a fantastic club."

Along with six Grand Final victories, in which he has twice been voted man of the match, Sinfield has also led the Rhinos to three World Club Challenge wins.

In a trophy-laden career he rates last year's success over Warrington at Old Trafford as his highlight so far.

"I have to say last year's Grand Final because of the memories I have from that night after the year we'd had and all the doubters we'd faced," he said. "That's the standout for me."