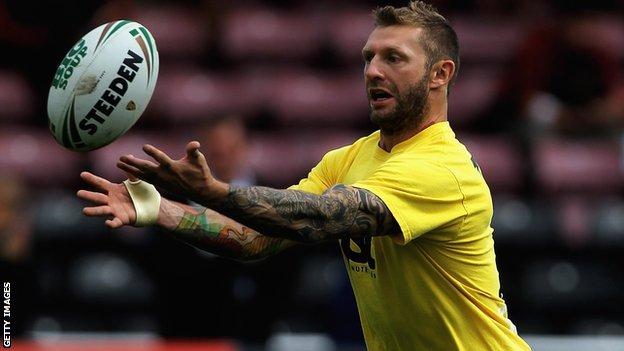 Featherstone Rovers have appointed former Salford and Wigan coach Sean Long as football manager until the end of the season.

Long, 36, left the Warriors earlier this month after only three months with Shaun Wane's side.

The Championship side are currently top of the table.

"I'm going to put some structures in place and look to simplify what we're doing at the moment," he told BBC Radio Leeds.

"I've not come here to be the coach, I'm managing the team and having some input with (coach) Danny Evans.

"I want to get everyone singing from the same hymn sheet because we're top of the league so there's not much wrong here."

Long began his career at Wigan, but it was with arch-rivals St Helens where he made his name, featuring in four title-winning sides.

He also had spells at Widnes and Hull FC as well as representing both England and Great Britain.

Rovers head coach Daryl Powell left for Castleford in May and his long-term replacement, John Bastian, does not join the club until 1 December.