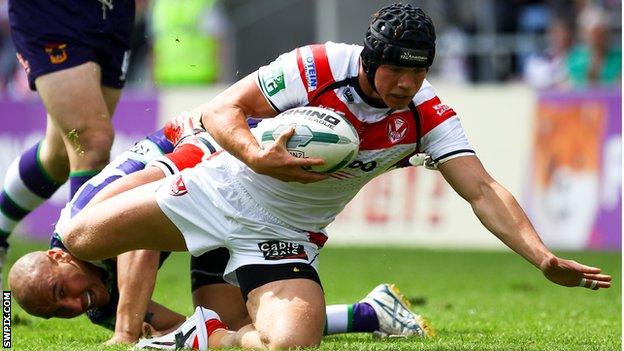 Saints raced ahead through Adam Swift's score but then could not break through until the 25th minute when three quick tries gave them a 22-0 half-time lead.

St Helens have now conceded 483 points in Super League 2013, the most of any side in the top five and 99 more than arch rivals Wigan.

Dan Sarginson and Iliess Macani were the scorers for Tony Rea's London, who must win at least two of their last three matches to stand any chance of climbing off the foot of Super League before the season's conclusion.

The visitors started brightly enough but fell behind when Soward's pass was intercepted and the ball was spread wide to Swift, who continued his excellent scoring record for Saints.

Jon Wilkin set up Louie McCarthy-Scarsbrook and Paul Wellens was the provider for the first of Meli's two scores before poor defence from Jordan Turner allowed Tommy Makinson to cross.

Saints, who have now and are one victory away from guaranteeing a top-eight spot, took advantage of the extra man as Lomax collected a low kick from Wellens to score.

The visitors deservedly got themselves on the scoreboard with their two late tries, but St Helens winger Meli rounded things off, completing his brace in the final minute.

"It was an ugly win. The boys are a bit down over their second-half performance though.

"We spoke at half-time about London. They have a lot of injuries and it's hard for them so you have to give them credit.

"We were guilty in the early part of the year of not starting well but now we pride ourselves on it in both halves."

"We are down on troops, energy and confidence but are fighting as hard as we can.

"The players are disappointed because we didn't do the basics and play smart and we started poorly again.

"There are some positives in that we are giving some young lads opportunities and the older players are putting their hands up too.

"We are sticking together and I think it showed tonight."