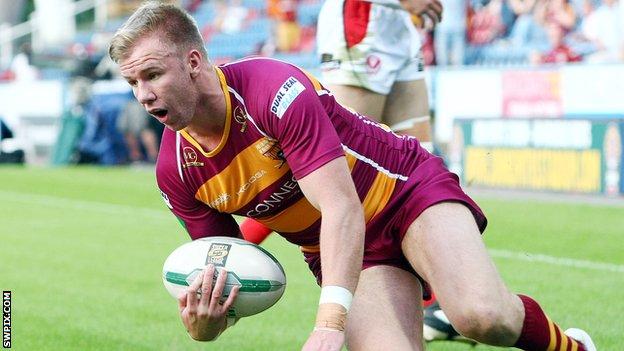 Further scores from Brett Ferres and Scott Grix put the Giants in command.

Murphy's second try sealed a and a three-point lead at the top of the table.

With just three matches of the regular season left to play, victory for Paul Anderson's side at the DW Stadium has left Huddersfield as strong favourites to finish as league leaders for the first time in the Super League era.

Challenge Cup finalists Wigan, who took the League Leaders' Shield in 2012, were five points clear in June but have stumbled dramatically losing four of their last six league matches.

London A, Wakefield H, Bradford A

In addition, Shaun Wane's Warriors are still to beat a fellow top-four side in Super League this season and face a much tougher run-in than the Giants, who do not have to play another team currently inside the play-off positions.

For the second week in succession, Wigan were without star man Sam Tomkins. Having missed their because of illness, a back spasm prevented the England full-back from featuring against the Giants, while captain Sean O'Loughlin and scrum-half Matty Smith were also absent.

But the injury-hit Warriors made a dream start, even so, Smith's deputy Powell touching down a loose ball as the visitors spilled Blake Green's high kick to the corner, before Huddersfield wide man Murphy collected Danny Brough's grubber to restore parity.

Wigan went back in front with Charnley's 30th try of Super League 2013, and arguably one of his best of the campaign. Receiving the ball from Darrell Goulding more than 50 metres out, the winger brushed off three tackles to cross for a seventh consecutive game.

Once again the Giants had an immediate response, Chan taking Luke Robinson's short pass to ensure the sides went into the break on level terms.

Huddersfield took the lead for the first time shortly after the restart as a forward-looking pass from Robinson sent Ferres over near the posts.

Uncharacteristically, Super League's leading goal-kicker Brough failed with a simple conversion and a subsequent penalty, but those misses proved academic as full-back Grix's individual try and another battling effort from Murphy gave the visitors an unassailable advantage.

"Going to Wembley [for the Challenge Cup final on 24 August] has not taken our eye off the ball. We were not that far off today. It is not a crisis. We are playing some good stuff.

"This was one v two [in the Super League table]. If it was one v eight I would understand the crisis comment.

"We were beaten by the better team and we just need to learn from it.

"We had a few players missing but I was still confident we could have won today. We had spells in the first half where we could have scored a few tries but we didn't convert them.

"At the end of the day they played better than us. They deserved to win."

"We have put ourselves in a position now where we can achieve something, but we are also in a position where teams can come and knock us over.

"All we have done all year is focus week in, week out. We will enjoy tonight, have a good weekend off but then regroup on Monday and put all our attention into London Broncos.

"We haven't won anything yet. We have got to keep winning week by week. We won't get ahead of ourselves."