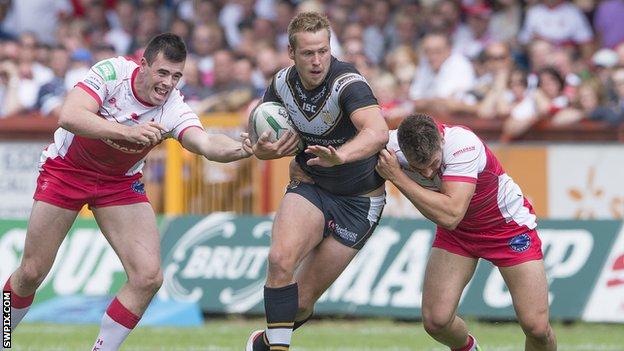 Rovers led 8-6 at the break, Liam Salter crossing for the hosts.

Peter Gentle's side now have the edge in East Yorkshire derbies this season, winning two of their three meetings in 2013.

They have also significantly strengthened their chances of finishing in the top eight, inflicting a first home Super League defeat on Hull KR since 28 April in the process.

The aftermath of the last fixture between the two rivals at the Magic Weekend in May was dominated by the controversy surrounding Chris Green's disputed winning try but there were few doubts about the validity of Hull FC's victory on this occasion.

And while both sides were down to 12 men, home centre Salter collected Greg Eden's pass and clutched on at the second attempt to cross for his fourth Super League try of the season.

After Hull KR winger David Hodgson had become the third player to be sent to the sin bin for holding down in the tackle, the visitors - who had struggled to make the most of their previous attacking opportunities - took advantage of the extra man as half-back Miller dived over from close range to level the scores.

As well as losing their lead, the home side also lost full-back Eden to a left knee injury, but they went into the break two points ahead after a successful Michael Dobson penalty.

But three scores in quick succession after the interval gave Hull FC the momentum to claim the spoils.

They were awarded a penalty try early in the second half, when Travis Burns was deemed to have held back Yeaman as he was about to touch down a loose ball in the corner.

The Challenge Cup finalists stretched their lead further with a breakaway score. Having cut out Craig Hall's pass, Whiting found his path to the try line blocked, but Shaul was in support to complete the move and enhance his prospects of facing Wigan at Wembley on 24 August.

From the kick-off, half-back Daniel Holdsworth offloaded to Arundel and the centre raced 80 metres to put the Black and Whites 24-8 in front.

Walker's powerful effort from close range kept Hull KR in touch, but Hull FC went three scores clear again through Whiting, although there appeared to be two suspect forward passes in the build-up.

Rovers prop Tuimavave scored a try for the second game in succession but time ran out for them to make a comeback and Briscoe's late touchdown made sure of the win.

There was still time for Hull KR half-back Burns to be sent to the sin bin after another flare-up in the closing seconds, and Danny Tickle made it seven successful kicks out of seven with a last-minute penalty from 50 metres.

"I was really happy. We competed hard and we had no right to be in that game at all.

"Rhys Lovegrove [who pulled out through injury before kick-off] had a rib problem and wasn't able to play and I've no idea how long he might be out for.

"A few poor individual errors in the second-half cost us big time. Other than that, it was nip and tuck for long periods.

"I was happy with the way every one of my players played. Of course we missed the eight players that didn't play but we were in a position where we could have won that game against the odds."

"We had a chat and changed things at half-time. To the players' credit they adapted to it very well both in attack and in defence.

"As a coach, you are never happy to be behind.

"We squandered good possession when we got into good territory which was disappointing."