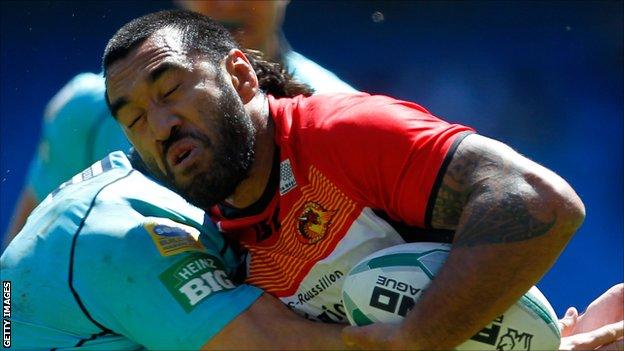 Catalan Dragons centre Zeb Taia will serve a three-match suspension after the Rugby Football League rejected an appeal against the decision.

Taia, 28, was found guilty of a Grade C reckless striking with the shoulder charge on St Helens' Gareth O'Brien.

O'Brien was withdrawn on a stretcher, while Taia was placed on report.

Catalans before the panel

"After taking all submissions into consideration, the committee deemed the original sanction of a three-match ban appropriate," the RFL statement read.

The Perpignan club also forfeits a £200 appeal bond in addition to the £300 fine also imposed on Taia after the initial panel decision.

Since joining Catalans from NRL side Newcastle Knights in pre-season, the Cook Islands international has made 23 appearances, scoring 13 tries.

Dragons chairman Bernard Guasch had to penalise the former Knights player in such a manner, citing examples of more lenient punishments for similar incidents.

In particular the case of Wigan Warriors prop Scott Taylor, whose own challenge on O'Brien resulted in no penalty from the RFL after the player was placed on report.

For head coach Laurent Frayssinous the loss of Taia is a blow, with Scott Dureau, Brent Webb, Olivier Elima, Louis Anderson and Jason Baitieri all out injured.

"I am severely disappointed with the findings of the tribunal," Frayssinous said.

"This is not the first time one of our players has been suspended for a number of games after similar offences by players from other teams have seen them either escape a ban or pick up a one-game ban."