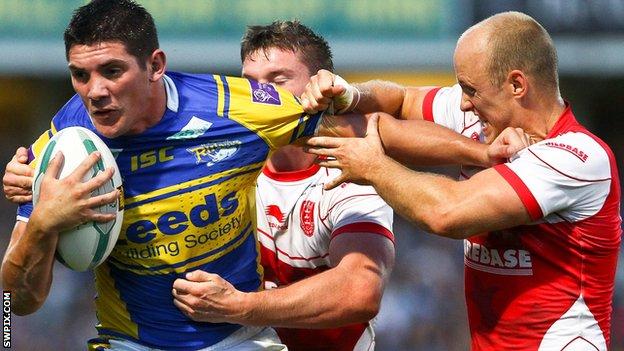 Jordan Cox and Rhys Lovegrove tries, coupled with Dobson's four goals were enough to see off the Rhinos on home turf for only the third time in 2013.

Kallum Watkins try had put Leeds ahead, but despite a second from the England centre, they fell short at the end.

Success at Headingley for Rovers, their first since March 2010, boosted their top eight hopes and pulled them six points clear of Bradford in the table.

Victory is made all the more sweeter for Craig Sandercock's squad on the back of defeat by rivals Hull FC last weekend, as well as an extensive injury list which was deepened by the loss of Greg Eden in the same game.

The Rhinos are still in the box-seat for fourth place and a potentially easier play-off schedule, but defeat - their first after four straight wins - means they must wait till the visit of Catalans in a fortnight's time to book their top four spot.

Both sides showed their defensive qualities in an even first quarter, and it took a moment of quality from Liam Sutcliffe to break the deadlock.

First he spun to slip away from Dobson and Lovegrove and after he sprinted clear of the defensive line fed the supporting Watkins to score.

However Rovers replied with an opportunist try, Ryan Hall uncharacteristically spilling a Dobson chip to the corner and Cox was swift in darting over to get on the scoreboard.

Lovegrove made up for his earlier defensive frailty with a steamrollering run down the left after initial work by Lincoln Withers and Dobson to give Rovers the half-time lead, and continued their momentum into the second half.

Rovers struck the first blow after the hooter, and when the offside Zak Hardaker gathered the loose ball, Dobson booted the resulting penalty between the posts to add to the tally.

That kick roused Leeds and they stepped up the pressure with repeat sets on the Hull KR line, but were unable to prise their way through scrambled defence.

Having survived a sustained spell of pressure, Rovers launched their own attack on the Rhinos line and after Kevin Sinfield's drop out flew into touch on the full, Dobson again clipped two from the tee to keep the scoreboard ticking.

Video referee Ian Smith ruled that Hall failed to ground in goal after Caro allowed Sinfield's grubber to bounce out of his grasp, but Brian McDermott's side got a try their pressure warranted shortly after.

Sinfield's vision was the catalyst, finding James Duckworth on the right after Hall kept the ball alive on the opposite flank, and the young winger moved the ball inside to Watkins for his second score.

Leeds could have moved level had England captain Sinfield not fumbled close to the line after Hall's break down the left, but Rovers held out to collect two precious points.

"I didn't think we were great but, at the same time, we were not awful. I've not too many gripes. I thought Hull KR played better than us and grew in confidence as the game wore on.

"When we do our review, there will be things we could have been better at during those 28 tackles but they gambled on cutting us off and it worked.

"Hull KR haven't been far off in the games they've lost recently and we were expecting them to be good."

"I'm really pleased for the boys. To put in a good performance like that away from home, I couldn't be more proud of them. It wasn't pretty but all those young kids who came in tonight defended for their lives.

"I got a crick in my neck watching our line. They way they defended set after set, the young kids can be very proud.

"Our defence was outstanding and to limit their tries to those kicks was very pleasing. The boys showed some character tonight."