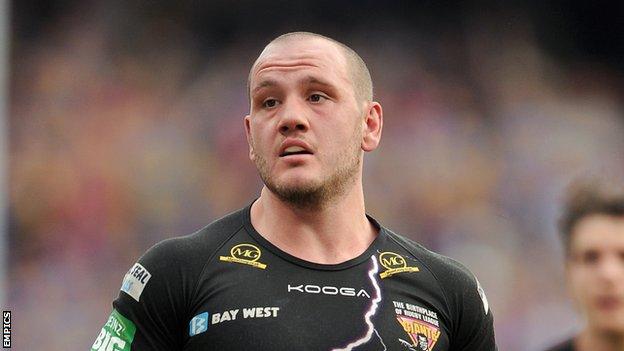 Aaron Murphy's early try gave the Giants the lead in a tight first half.

Scores from Ukuma Ta'ai and Eorl Crabtree after the break, both converted by Danny Brough, extended Huddersfield's lead to 18-0.

Winger Kieran Dixon returned to the London Broncos line-up after missing six games with a broken hand in what could be their last game at the Twickenham Stoop.

The Broncos have previously announced they were looking to end their groundshare with rugby union side Harlequins but are yet to confirm where they will play their home games next season.

The hosts had lost their last seven Super League games but the first half of their match against the top-of-the-table side proved to be close.

The Giants opened the scoring on six minutes when winger Murphy latched onto Brough's kick down the left and crossed the line five metres inside the touch line.

Huddersfield had to weather pressure from London but then Broncos back row Matt Cook and Giants forward Ta'ai were sin-binned following a brawl after Cook had taken exception to a tip-tackle.

Just before the break Brett Ferres crossed for Huddersfield but his try was disallowed for use of the shoulder, despite the back row being in possession of the ball.

The visitors extended their lead after half-time through two tries, with Tongan Ta'ai having a hand in both.

Moments after returning from the bin he picked up a pass from Brough to power over in front of the posts and then he side-stepped two tackles to feed Crabtree, who touched down.

However, the Broncos regrouped and forced their way back into the match when Woodburn-Hall gathered the ball following indecision from the Huddersfield defence and used his momentum to touch down despite being tackled short of the line.

Pressure was mounting on the Giants and, after losing the influential Brough to a shoulder injury, London closed the gap further.

Jamie Soward kicked to the in-goal area and after Jermaine McGillvary failed to put the ball into touch, Hurst pounced to score.

With five minutes to go Huddersfield were awarded a penalty 35 metres out and, with Brough off the field, Grix held his nerve to extend their lead to eight points.

Back row forward Ferguson then wrapped up the victory when he used his strength to go past a flat-footed Dixon after being fed by Ferres.

The win sees Huddersfield move three points clear of second placed Warrington Wolves and they can now secure their first silverware of the season with a win at Wakefield next week.

The Broncos, meanwhile, remain rooted to the bottom of the table and face an uncertain future with outside back David Howell and long-serving Australian Chad Randall the latest players to announce they are leaving the club at the end of the season.

"We were playing against a very good side, they were just so hard to get through.

"They haven't fluked their way to the top, they are up there for a reason. You usually get there by defending well and they did that.

"We tried things but we just couldn't get there. But it didn't break us, we just tried to find the right to get into the game.

"We just had no bench left in the second half, we were down to empty. I was a bit disappointed with the last try, we could have kept that one out."

"The main aim coming down here was to come and get two points and it's mission accomplished.

"I thought London caused us a hell of a lot of problems both offensively and defensively and they forced us to play.

"I thought patience, pure determination and hard work got us the win in the end. It was a scrappy game and I thought we just did enough personally.

"We have a break now, but we have to improve.

"Two points is two points isn't it? It doesn't matter how you earn them. I think what was credit to the group is that they stuck together."