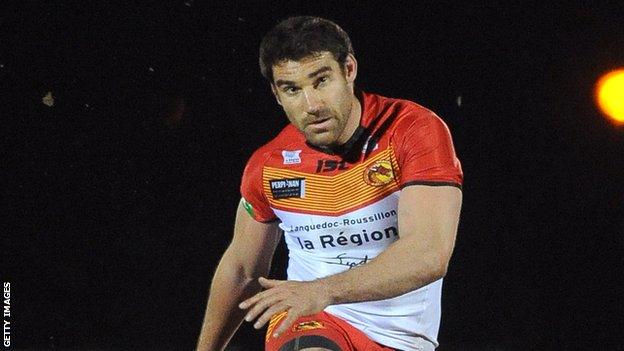 In a tight first half, Frederic Vaccari put the hosts ahead but Scott Taylor crossed to make it 6-6 at the break.

But the French side began to pull away in the second, with three Thomas Bosc penalties giving them a real advantage.

And tries from Steve Menzies and Eloi Pellisier ensured third-placed Warriors can no longer finish above leaders Huddersfield with two games left.

The result - which assures Catalans of a play-off spot - means Wigan go into next weekend's Challenge Cup final against Hull FC on the back of a poor run of form, having now lost four of their last five Super League matches, including last week's 30-12 defeat by Huddersfield.

With the Giants beating London Broncos earlier in the day, the Warriors knew they needed a result to stay in the title race, but they were on the back foot in a fast-paced first half after excellent work from Brent Webb and Menzies prised them open and gave winger Vaccari a clean run through to the line from 20 metres.

Despite the breathless speed at which both sides were playing, early errors were frequent on a humid evening.

Towards the end of the half, however, the visitors began to exert real pressure and got back into the game when Taylor took the ball off Logan Tomkins, bounced off a defender and charged home with the last set of six of the first half.

After Bosc and Richards exchanged penalties to take it to 8-8, the hosts used the boot of Bosc to take advantage of the Warriors' ill-discipline by converting two successive penalties.

And the Dragons used their momentum to assert their authority, with Henderson and Webb combining to put in Menzies to cross, before Pelissier compounded the visitors' misery.