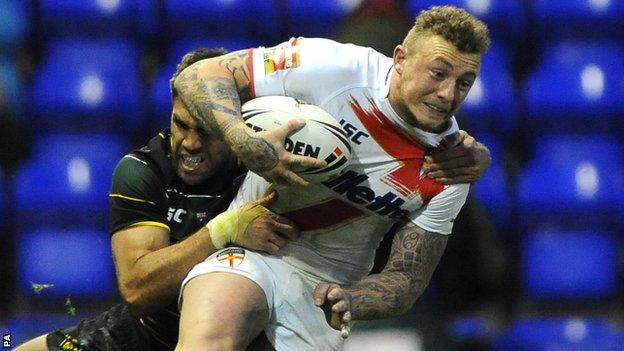 England winger Josh Charnley believes a Rugby League World Cup win for his side on home soil would make the country "take notice" of the sport.

The tournament, which also sees matches played in Wales, Ireland and France, begins in 50 days' time.

Domestic governing body the Rugby Football League (RFL) hopes it can boost the sport's profile in the UK.

"The World Cup is very exciting - especially because it is mainly going to be hosted in England.

"It's good for English rugby and hopefully we can get the whole country to back us.

"Winning the tournament would be massive in terms of promoting the game and boosting its profile nationwide."

RFL chief executive Nigel Wood hopes the tournament can capitalise on the success of last year's Olympic and Paralympic Games and capture the UK public's imagination in a similar way.

"The World Cup is a wonderful opportunity to reach out to new audiences who want to be involved in the next major international sporting event after London 2012," he said.

Fourteen nations are competing in the month-long tournament which starts when England face Australia at Cardiff's Millennium Stadium on 26 October.

England will host 20 of the 28 matches, including the final at Old Trafford in Manchester on 30 November. Host cities include London and Bristol, alongside several venues in the traditional Yorkshire and Lancashire heartlands of the sport.

As well as the opening fixture, Wales also stage matches at the Racecourse Ground in Wrexham and Neath's The Gnoll.

France play two of their group matches on home soil in Avignon and Perpignan, and Ireland play Australia in Limerick.

Charnley, who is Super League's top try-scorer this season with 30 touchdowns, is confident England can use home advantage to upset favourites Australia and New Zealand by lifting the World Cup for the first time since 1972.

"We've got a good chance of winning," he said. "We've trained well and bonded well, so the spirit in the camp is high.

"I think we can go all the way. We've got the skill level and personnel - we're looking good and feeling confident."

The 22-year-old also believes international success for England could boost the domestic game by persuading more British players to remain in Super League rather than being lured to Australia's NRL.

The Burgess brothers - Luke, Sam, George and Tom - became the first set of four siblings to play for an Australian top-flight side in the same game for more than a century when they lined up for South Sydney Rabbitohs last week.

And Charnley's Wigan team-mate Lee Mossop, 24, has signed a deal with Parramatta Eels next season.

"Lots of players are packing up and flying off to Australia, so it would be good to try and influence them to stay here and make them realise staying in English rugby is better than going over to Australia," said Charnley.