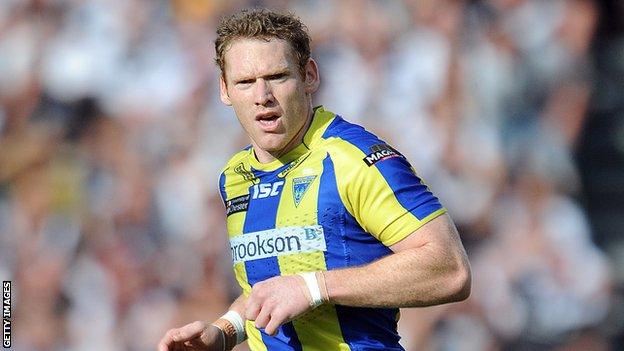 The trio have agreed contracts with the Wire until November 2017.

Chris Riley, Paul Wood, Ryan Shaw and Danny Bridge have been given two-year deals, while hooker Michael Monaghan signs on for a year.

The end-of-season departures of veteran captain to Salford, prop to Bradford and forward to St George Illawarra have already been confirmed.

In addition to the 11 players extending their stay at the Halliwell Jones Stadium, will join the Wire next term - the Super League club's first new signing for two years.

"We are delighted to be retaining the stability of our squad," head coach Tony Smith told the club website.

"The fact that we are getting stronger as a squad each year has probably been shown by the number of consecutive wins we've had recently. It has shown that we are still improving and we are striving to get better and better each year.

"We've got some terrific young players coming through and the consistency of our senior players has been fantastic as well. We are delighted that we will only have a small turnover of players once again - that's the way we like it at Warrington."

Joel Monaghan, the younger of the two siblings, has crossed for 22 Super League tries in 2013 and only lies behind Wigan duo Josh Charnley [30] and Sam Tomkins [23] in the league's scoring charts.

Winger Riley has 15 tries and Atkins 14, although the England international centre currently has an ankle injury and will not be fit to face