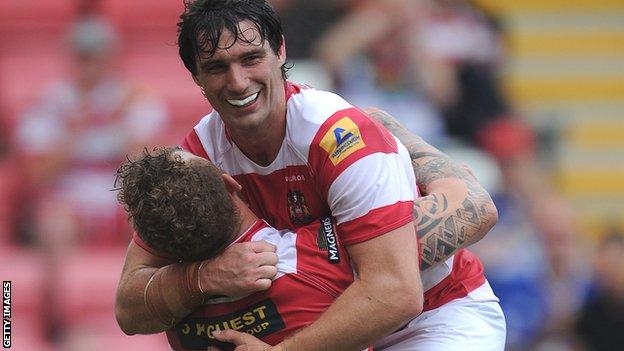 I only started playing rugby league properly when I was 16. To be walking out at Wembley 10 years later, for a Challenge Cup final in front of 80,000 people, is going to be something I will never forget.

I played football for Everton from the age of 12 until I was 15 and I really enjoyed playing there at that time, although I do not think I was quite the standard to play at Wembley!

Wayne Rooney was at Everton at the same time as me, although he was a year older. James Vaughan, who now plays for Huddersfield, was there too. Victor Anichebe, who is still at Everton, was a year younger than me. They have all gone on and done fantastic things in their football careers, but I am happy to be playing rugby.

Saturday's game against Hull FC is probably the biggest moment of my career so far.

When I played in the 2010 Grand Final for St Helens, I had been on loan at Salford City Reds all year and I only came back for the play-off games. I was not really involved at Saints at that time.

Although it was great to play in that final, I consider this a bigger game for me. I have been at Wigan for over a year and I am the recognised "number seven" at the club.

Hopefully I can play a major part in the game on Saturday, but it only matters if you win, doesn't it - no one remembers the losers.

The excitement has been building ever since a couple of weeks ago now. All the boys are really excited about this weekend and going down to Wembley.

We have had a couple of defeats in the league that we have been disappointed with, but having the final at the back of our minds has probably been one of the reasons for a slight dip in form.

It is going to be a great final. Both teams have got great defences and some great strike players, so it should be a great game.

We have just got to be a bit more consistent in what we are doing. We have not played well in the last couple of weeks and we need to get back to completing our sets. As long as we do that and get to our kicks, we will be in the game.

I think we have missed Sean O'Loughlin and Sam Tomkins, who have been out through injury over the past month or so, but we are not a two-man side. We are the type of team that everyone needs to be playing well to win games.

Wigan trail early on, but in-form full-back Tomkins scores four more tries as the Warriors race to victory in the second half at Craven Park.

Charnley's first-half treble sets Wigan on the way to a comfortable quarter-final success.

Wigan register a record margin of victory in a Challenge Cup semi-final as London Broncos are brushed aside at Leigh Sports Village.

We have got a who can score tries out of nothing, and Josh Charnley is another one of those.

But the bloke we have missed the most is probably our captain, "Lockers". He is a and a great leader. He is one of those players that really gets us going forward when we need to.

I hope he is back this week, and I am sure he will be because he is working so hard to get back to full fitness. We are going to need the likes of him this weekend because this is an important game for us.

I am at the stage of my career now where I want to and play in big games. Coming to a club like Wigan, with the history it has got and the players that are here at the minute, was a no-brainer.

I am made up for the boys because we have put in a lot of hard work throughout the season and so have the coaches, so hopefully we will get the right result for everyone on Saturday.