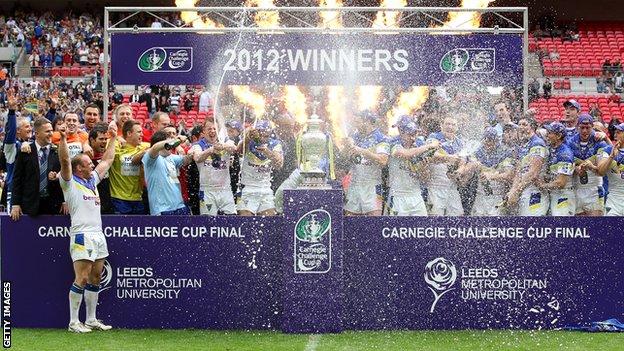 Nothing fills the rugby league veins with adrenalin quite like the Challenge Cup.

Rugby league's most prestigious cup competition provides the sport's annual day in the national and international spotlight. The advent of Super League and play-off rugby added the Grand Final to that mix, but Wembley remains the holy grail.

For me, the Challenge Cup is bigger to rugby league than the FA Cup is to football. The big occasion, the luxury hotel, the superstar welcome from adoring fans. These things come around often for football's millionaires and the next occasion is rarely far away.

For the rugby league player this can be a once-in-a-lifetime opportunity to experience the limelight, the high life and the superstar treatment.

"This is what you play rugby for" Hull forward Joe Westerman said.

The former Super League Young Player of the Year quit his local team Castleford in 2010 to make that step up and experience the big finals. This will be his first one.

"This is why I left Cas," he said. "I feel it finally justifies my move. Players can go 10 or 15 years in their career and never play there - this is my chance.

"No matter how I imagine it, I expect on the day it will be even better than I've dreamed."

Hull have a Wembley hoodoo to overturn, having never won at the famous venue - their 2005 win over Leeds coming at the Millennium Stadium.

Favourites Wigan are going through an uncharacteristically sticky patch in Super League, but few people within the game expect that to have any bearing on Saturday.

"Wigan are the best team in the league" said Hull centre Kirk Yeaman, who has played in two cup finals for the club, winning one and losing the other.

"If you look at their line-up from left to right with Sam (Tomkins) at the back it doesn't get much better."

The two coaches will lead teams out at Wembley for the first time, too.

Peter Gentle does so with question marks already appearing over his position as Hull coach. Shaun Wane - Wigan through and through - will lead the Warriors into the great sporting coliseum with the pride of a father accompanying his daughter down the aisle.

Wane has struggled to keep the beaming smile off his face this week. He admits this is not like "any other game" and refuses to use that phrase to keep his players' minds on the prize.

His main team-talk will be done in the hotel on Friday night because anything he says in the moments before the players leave the dressing room will be forgotten amid the deafening crowd noise that will greet their emergence from the tunnel.

The bigger picture of course is the game's constant need to seize every window to shine when the world is watching. This is paramount in World Cup year. Events like this cup final draw in new fans so it is imperative that the occasion doesn't disappoint.

Wigan's England forward Lee Mossop, who moves to Australia at the end of the season, said: "It is crucial for the sport to put on a spectacle for these showpiece events.

"The Aussies have digs at English rugby but their players are envious of this competition and their players come over here mainly to play in it."

Mossop admitted it will be tough to keep a lid on the adrenaline in the opening moments.

"When the whistle goes and I charge in I just want to knock someone out," he said. "But if I get the first carry all I want to do is not knock on, not let my team-mates down."

On a personal note, I will be commentating on a first major final since the tragic loss this year of our friend and colleague David Oates.

This game was so special to Oatesy and he always did it brilliantly, even interrupting a family holiday last year to fly back and call the game.

He will be in all of our thoughts on Saturday.