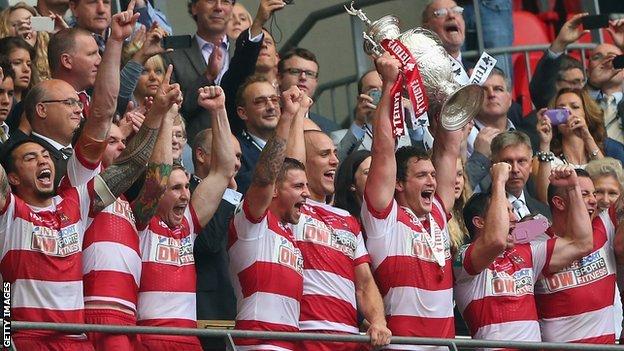 Wigan Warriors captain Sean O'Loughlin says it is a "special" achievement for the town to hold both the FA Cup and the Challenge Cup simultaneously.

The rugby league team followed up Wigan Athletic's Wembley win in May with a 16-0 victory against Hull on Saturday.

"It's a pretty special accomplishment for the town to have both trophies side by side," O'Loughlin told BBC Sport.

It is the first time in history that two clubs from the same town have won both cup competitions in the same year.

When Wigan Athletic won the FA Cup in May, it was a first major trophy in the 81 years since the formation of the football club. Wigan Warriors lifted the Challenge Cup for the 19th time on Saturday and are the most successful side in the competition's history

While the football team's success came as huge underdogs against Manchester City, the Warriors entered the Challenge Cup final as slight favourites, despite having lost five of their previous seven Super League matches and slipping out of contention for the League Leaders' Shield.

Shaun Wane's men justified their tag with a resolute performance in wet conditions at Wembley.

Centre Iain Thornley's first-half try was backed up by three goals from winger Pat Richards, before a late individual effort from full-back Sam Tomkins sealed a record 19th success in the competition.

England international O'Loughlin, who also lifted the trophy as Wigan skipper in 2011, added: "It probably wasn't the greatest game to watch in terms of a spectacle, but sometimes you've got to win ugly and that's what we did a little bit today.

"[Man of the match] Matty Smith's kicking was probably the difference for us. We held the ball a little bit better than them, but Matty's kicking on the back of some our completions really turned them around.

"In those conditions, that's really big for you, because you're not going to throw the ball around and score a lot of tries."

Having claimed the first silverware of the 2013 season, Wigan's sights are firmly set on winning the Grand Final in October and becoming the first team to win the "double" since St Helens in 2006, especially as their long injury list has now eased.

"We'll get a bit of confidence out of this," said O'Loughlin, who was an injury doubt for Wembley himself with a leg problem.

"We know we can play well when we have to, although we haven't quite delivered in the last few weeks.

"We can try and use this now as a bit of a catapult for the remaining couple of Super League games and then we can hit the play-offs with a bit of form."

In a repeat of Saturday's final, Wigan face Hull FC again in a Super League fixture on Friday, before rounding off their regular season against reigning champions Leeds on 5 September.