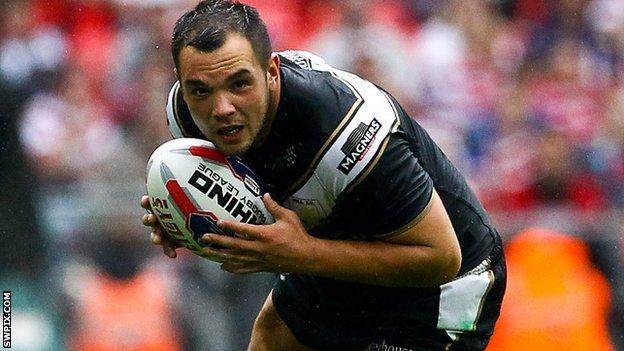 Triumphant in the Challenge Cup final against Hull last weekend, much-changed Wigan went in 16-12 up with two scores just before the interval.

A Crookes double tied things up at 26-26 before a converted Anthony Gelling try and a drop-goal looked to have won it for the Wembley victors.

But Tom Briscoe went over for Hull, who won with two Holdsworth one-pointers.

Wigan made 12 changes to the squad that were victorious in the Challenge Cup final and fell behind to two Hull tries, despite Andy Powell's powerful first score in Wigan colours.

Before the break, Ben Flower touched down for the hosts and then Ryan Hampshire ran 60 metres to score on the hooter.

Joe Burgess and Iain Thornley tries looked to have sealed victory, but Hull fought back as Crookes completed his hat-trick and Joe Westerman went over to pull the Black and Whites level.

After Sam Powell's drop-goal gave Wigan a seven-point lead with five minutes left, the win seemed safe, but Hull winger Briscoe ran the length of the field to cross before Holdsworth's kicking heroics.

"I thought everyone's attitude was spot on. We could have won it but I think a draw would have been a fair result.

"They are a good team, Hull, and they were missing a few from the weekend. I think a draw would have been fair and if we had sneaked it I don't think anyone would have complained.

"I'm unhappy because we have lost again but I will wake up in the morning and I'll be pleased. I need to give credit to John Winder and Matty Peet, our junior staff who have brought the lads through."

"I thought we had thrown it away. There was a time there when we couldn't get our hands on the ball and then all of a sudden we had all the ball.

"It has been a tough week. It has been tough to try and generate some intensity in training. To get a victory is all we needed tonight and we didn't care how we did it.

"It sets us up now to get a win next week and hopefully a home semi."