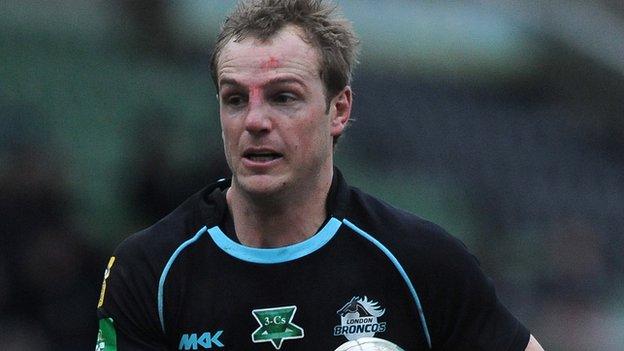 Bottom club London Broncos beat Bradford to secure only their fourth victory of the season.

A single try from Broncos' David Howell separated the sides at half-time.

Bulls took the lead when Keith Lulia crossed and Jamie Foster converted but they were pegged back again by Howell's second of the game.

Scores from Jamie Soward and Mason Caton-Brown extended the visitors' lead before Bradford back-rower Danny Addy went over to reduce the deficit.

The result gave London Broncos their first Super League win since 27 April and moved them to within a point of 13th place Salford on the penultimate weekend of the regular season.

"We looked like we had a few players give up - which they didn't - but a lot of the time we defended big sets, only to throw the ball back to them.

"We defended well but you can't make 18 errors, we're talking about 40% completion. We let ourselves down today."

London Broncos coach Tony Rea: "It was important, it was gutsy and we've stuck together as a group for a long time and it got us rewards today.

"It certainly helps our cause - it lifts everyone at the club and keeps everyone enthused about what we are doing.

"Jamie Soward rewards a lot of the effort we put in but I thought that Mason Caton-Brown (making his debut after playing on dual registration with Hemel Stags all season) had a good game and it was significant that he was playing alongside Soward,"