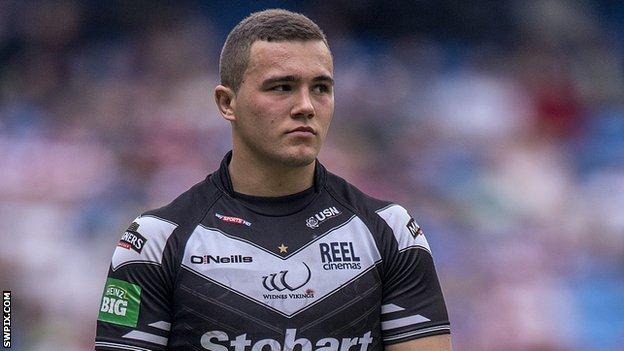 Widnes ran in six tries as they defeated Hull KR, with Jack Owens kicking all six of his conversions.

The hosts raced into a 24-0 lead with tries from Kevin Brown, Adam Lawton, Rhys Hanbury and Joe Mellor before David Hodgson went over twice for Hull.

Josh Hodgson had time to cross once more with Michael Dobson sending over three conversions for the visitors.

But further scores from Patrick Ah Van and Frank Winterstein, either side of Hodgson's hat trick, sealed victory.

Influential half back Travis Burns suffered a broken arm during the game, while Burns' half-back partner Michael Dobson will also have scans on a foot injury on Monday to reveal the extent of his injury.

"It's a tragedy for Travis, he's broken his arm so that's him done for the season.

"Travis is one of our best players and it's going to be real tough for us now.

"Michael (Dobson) will go for scans tomorrow on his injury. He should have come off but he is a tough character and stayed on and led us round the park well in the second half even on one leg."

"I think the first 40 minutes were the best we have played all year. Even though we were good at Warrington and worked hard, our intent and purpose and sting in attack and defence was relevant about how we went about our business.

"There were some real good shots and intent on how we wanted to defend and to keep a good attacking side like Hull KR to nil at half time showed a very tough performance.

"By the time of the Hull KR fightback I thought we should have been 50 points up, we had a few more opportunities and the referee seemed to find every single one of our forward passes

"But we just got a bit edgy by not finishing off our chances and it could have been at least 40 to 50 points before they were even on the scoreboard.

"To go toe to toe with a side in the eight with the likes of Michael Dobson and Craig Hall in the opposition it was a big effort."