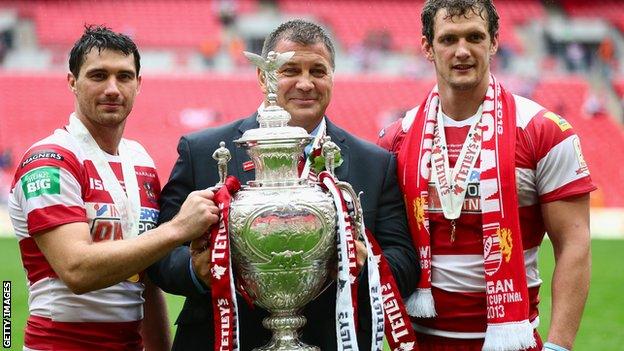 Shaun Wane has dismissed concerns about the form of his Wigan Warriors side ahead of the Super League play-offs.

on Thursday, a seventh defeat in nine league games, that saw them slip to fourth in the table.

"The players can do it and have done it. We did some good things against Leeds, so all that talk about being concerned is pure rubbish to me."

Wigan led Super League by five points in June and, despite their they slumped alarmingly in the league to finish behind Huddersfield, Warrington and the Rhinos.

In seven league fixtures against those three teams, Wigan have won just once, drawing another and losing the other five.

The Warriors face Huddersfield on 12 September for a place in the play-off semi-finals, although the defeated side in that fixture will get a second chance to plot a path to the Grand Final at Old Trafford on 5 October.

Wane, who at the DW Stadium, told BBC Radio Manchester: "We've got some huge games in front of us and we need to improve our performance.

"We are aware of that but I've got the players to do that."