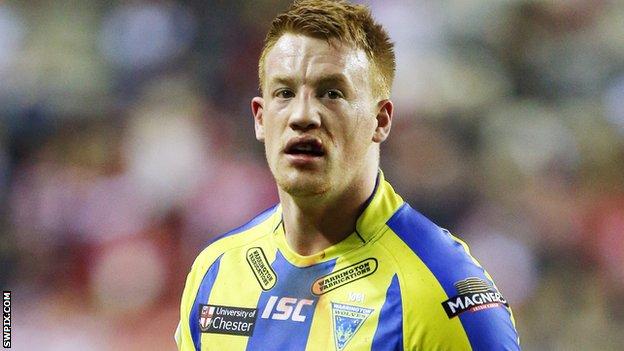 Rhys Evans and Stefan Ratchford went over in the first half as the Wolves settled the better of the two sides in atrocious conditions in Perpignan.

Dureau and Steve Menzies crossed to put the Dragons two points in front.

Riley dived over for the Wire to retake the lead and Dureau failed to snatch a draw, firing wide from 15 metres.

Warrington were already guaranteed to finish second behind Huddersfield in the table, but Saturday's result was crucial for the French club as they missed out on the chance to grab home advantage in their elimination play-off match against Hull FC.

Warrington face Leeds on 14 September for a place in the play-off semi-finals, in a repeat of the 2012 Grand Final. The Rhinos won 26-18 at Old Trafford to win the Super League title for the second consecutive year.

While defeat against the Black and Whites would spell the end of the Dragons' season, Tony Smith's Wolves know they will have another chance to reach the Grand Final even if they lose their home tie against Leeds Rhinos.

Torrential rain in the hours prior to kick-off made playing conditions extremely difficult and handling errors were common throughout a testing 80 minutes.

Chris Bridge set up winger Evans to slide over in the corner for Warrington, who welcomed back full-back Brett Hodgson and centre Ryan Atkins from injury.

Ratchford's disputed effort was allowed to stand by the video referee, stretching the lead to 10 points, but then Dureau intercepted the half-back's pass to snatch a breakaway try and give Catalans hope.

Knowing a draw would be good enough to climb above Hull and finish sixth, Dureau chose to kick for two points when Catalans were awarded a penalty with six minutes to go, but the usually-reliable Australian missed from close range.

"I think we can be optimistic for the play-offs, the objective was to perform in the last four games against Bradford, Wigan, Leeds and Warrington and I think we did that.

"Even if we still have to learn how to win the big games with a play-off intensity, I'm pretty happy with the performance.

"We have a quality team when the ground is hard, but when it is wet we have to learn to deal with that and be better."

"We rate that performance very highly, not the win as such, but the performance with the difficulties we had to overcome.

"I thought both teams were really gutsy tonight. I was so pleased it was raining.

"It would have been a much more attractive game had it stayed dry, no doubt, both teams like to throw the ball around.

"Catalans probably throw it around more than us but this time of year, that isn't going to happen too often."