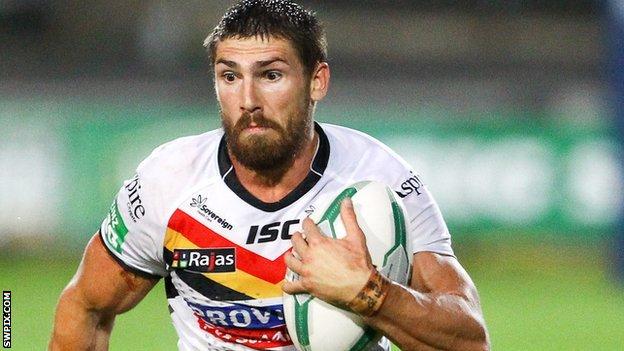 After clinching the League Leaders' Shield a week ago, the Giants rested their entire starting line-up ahead of next weekend's Super League play-offs.

And the Bulls took full advantage, with 10 tries to show for a one-sided derby.

Keith Lulia grabbed a hat-trick on his farewell appearance, with Elliott Kear, Danny Addy and Jamie Foster, who kicked nine goals, also on the scoresheet.

Bradford bounced back well from last Sunday's shock home defeat by London Broncos, labelled an 'embarrassment' by captain Matt Diskin to sneak ahead of Widnes and secure ninth place in Super League for the second successive season.

It was all a far cry from the joyous scenes which greeted Huddersfield's league-clinching 40-0 win over Wakefield last Sunday but Giants coach Paul Anderson will be unperturbed by a sixth defeat of the season as he eyes Thursday's qualifying play-off against Wigan and the chance to move to within 80 minutes of a first Grand Final.

Taking the opportunity to rest his first-team squad, he played only last weekend's four bench players, while full-back Jake Connor, scrum-half Jack Miller, Jack Blagbrough and Nathan Mason all made their Super League debuts. And he also gave run-outs to four other players with just four Super League appearances between them.

Bradford had four 18-year-olds of their own on show, including debutants Curtis Naughton and Nathan Conroy, in the absence of nine senior players through injury but they had enough experience to see them to their biggest win of the season, surpassing their 40-6 opening day win over Wakefield.

"It was good to get some smiles back on our faces. We well and truly let ourselves down last week.

"I said to them that it would have been awful to end the season on that note.

"The players have showed a lot of character. They have worked really hard and it's pleasing to see them rewarded."

"Everybody has got knocks at this time of the year and it was a short turn around. The scheduling hasn't helped that. If you look at the bigger picture, we had no choice but to do what we did today.

"This was a bit of a dead rubber. The only thing it's hurt is our for and against but we are where we are.

"There were a lot of people out there who over the year had earned an opportunity to play. I thought one or two took it and one or two didn't.

"The scoreline was never a worry, it was all about people doing the right thing on the field and I don't think we consistently did that. You could tell they had a lot more Super League experience than we did."