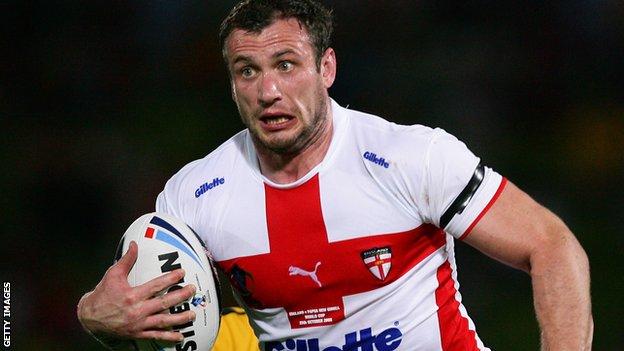 Ex-England captain Jamie Peacock is among BBC Sport's line-up for its TV and radio coverage of the Rugby League World Cup 2013.

BBC Sport is showing live coverage of all England's group matches, as well as a quarter-final, a semi-final and the final at Old Trafford on 30 November.

Each game will be broadcast live on BBC Radio 5 live or 5 live sports extra.

The tournament starts on 26 October when England play Australia at Cardiff's Millennium Stadium.

After their opener, England play Ireland on 2 November and Fiji on 9 November.

New Zealand are the current holders, having shocked Australia in the 2008 decider to win the tournament for the first time.

Mark Chapman will present the BBC's television coverage, with commentary from Dave Woods and Ray French.

Tanya Arnold will present a regular highlights programme, which includes all the action from games not shown live.

In addition, Radio 5 live will bring all the news, interviews and analysis throughout, as well as a daily podcast.

Chapman will also present a special preview forum show, with an audience and special guests, from Cardiff on 24 October. The show will be live on the BBC Red Button and simulcast on Radio 5 live (19:30-21:00 BST).

The BBC Sport website will provide comprehensive coverage across the entire World Cup, including a live stream of all matches shown on television and audio commentary of those live on radio. Live text commentary will be available for all home nations matches.

The website will also feature reports on every fixture plus the latest news and analysis from the BBC's expert team throughout the tournament.

BBC Sport director Barbara Slater said: "As we look forward to our coverage of the Rugby League World Cup, the BBC's commitment to rugby league is greater than ever for audiences across all of our platforms.

"We're proud to be the terrestrial home of live England international action from the World Cup, which builds on our continuing live coverage of the Challenge Cup, our highlights coverage of Super League and future live international rugby league."