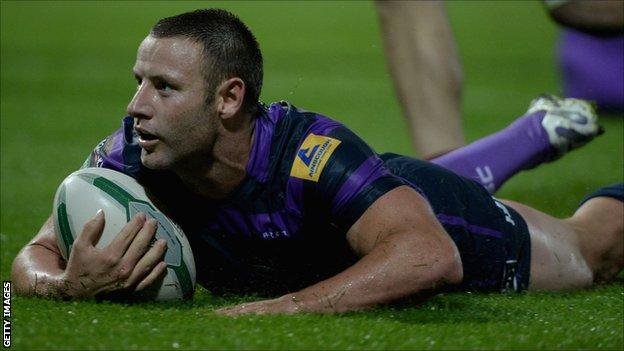 Wigan showed their big-game experience to overcome league leaders Huddersfield and book their place in the last four of the Super League play-offs.

They had to come from behind, Danny Brough's try putting the hosts ahead before Josh Charnley's score and two Pat Richards kicks established a lead.

Brough's penalty made it 8-8 at half-time but Wigan were dominant in the second half with 14 unanswered points.

Huddersfield, who lost their first home game of the Super League campaign since May's defeat by Warrington, will now get a second chance to progress, playing the lower ranked winners of the St Helens-Hull KR and Hull FC-Catalans ties next week.

Shaun Wane's Warriors side already have the Challenge Cup in the bag having beaten Hull FC at Wembley last month, and their effort at the John Smith's Stadium showed an appetite for the big occasion that had been lacking in a run of four regular-season league defeats at the end of the campaign.

Huddersfield's comparative inexperience seemed to cost them as they were outmuscled after a flying start.

Wet conditions did little to dissuade the hosts from an expansive game in the early stages, and they turned that dominance into points with a glimmer of magic from their captain.

Brough's kicking had already forced two drop-outs, and the half-back capitalised when he skipped a string of tackles to dive over between the Wigan posts.

Early aggression and power shown by the Giants, notably through props Eorl Crabtree and Craig Kopczak, seemed to take its toll on Warriors' union convert Andy Powell, who was withdrawn early on for Scott Taylor.

But having endured the early onslaught Wigan grew in confidence, with some smart kicking from Green and Smith applying pressure of their own, and they were rewarded with a try from Charnley.

It came from a flowing left-to-right move that ended with the England winger sliding over in the corner for his 40th score of the season despite the efforts of Joe Wardle.

Richards' kick was successful and the winger took the chance to extend the lead from a penalty awarded when the restart from Brough was touched on its way out by Green with his foot over the line.

Handling errors punctuated the play on both sides, and when Michael McIlorum blocked off Jason Chan, Brough drilled a long-range kick through the posts to tie the scores.

After the break, Smith and his halves partner Green began to dictate the pace, however, and their prompting paid off when another move to the right put Charnley in for a second.

Huddersfield responded, Brough's kicking again causing problems in the Wigan backline but the defence was firm, in particular shutting down the offloads from Brett Ferres on the left-side.

With time ticking by Paul Anderson restored Shaun Lunt to the Giants attack in a bid to turn the tide but the task was made greater by Smith's drop-goal with quarter of an hour remaining.

Wane's side made sure of their progress when Green's slippery run took him through the line of claret and gold shirts to establish a four-score lead, before a further Smith drop added insult to injury for a despondent Giants.

"It was the worst performance we've had for a long time. The Giants 2013 is not about one-out rugby.

"They asked more questions than we did. We took one or two short cuts and didn't show a great deal of honesty at times. We weren't great but that's out of our system so let's move on.

"You could see Wigan were a bit more battle-hardened. We couldn't win a tackle. They were rolling through us at times.

"It showed we needed a game. Whether it was the right decision to rest the players last week only time will tell."

"I thought it was a great performance. We defended tough and came up with a really good conservative game.

"I thought we completed the sets that were really important. We still made errors but our completion rate was good in those conditions.

"We showed in the first half that, when we kept hold of the ball, we could score. We're not getting carried away. it was a good win against worthy league leaders but we've still got two games to play."