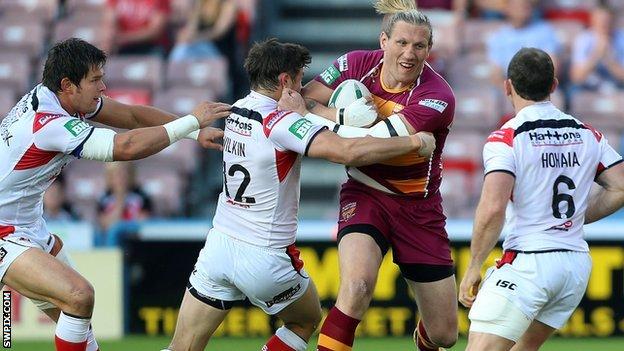 Huddersfield Giants prop Eorl Crabtree has said it is a unique feeling for his side to go in to Thursday's play-off with Wigan as the league's top side.

The Giants won the League Leaders' Shield earlier this month, their first silverware in the Super League era.

The 30-year-old prop, who stands 6ft 6ins and weighs 18st, told BBC Radio Leeds: "It's a massive occasion for us.

"It seems surreal that we're hosting Wigan as the top side and we're excited about it."

The England international continued: "I think it's going to be a belter because they've got a lot to prove after being dominated in their last game by Leeds.

"I'm sure they'll come out firing on Thursday and it'll be a very physical game. I can't wait."

"I've enjoyed the fact that I'm in but I'm more proud that there's five players from the club in the team," he added.

"I think it's important for the club and puts us on the map a little bit more."