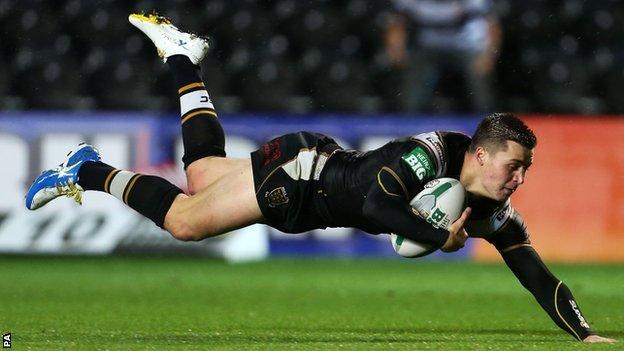 Hull came from behind to beat Catalan Dragons in a fiercely contested tussle to reach the preliminary semi-finals of the Super League play-offs.

It was an ugly affair, on a horrid, wet night at the KC Stadium, but Hull won two tries to nil to complete a victory which also marked the retirement of old Catalans warhorse Steve Menzies.

Jamie Shaul went 80 metres for Hull's first try on the stoke of half-time.

He's held in high regard throughout the world. I've nothing but admiration for him. He showed tonight he can still play at this level. He could play for another couple of years

Danny Tickle converted both, either side of a second-half penalty, while Thomas Bosc kicked a pair of two-pointers for the men from Perpignan, who missed the creativity and kicking game of scrum-half Scott Dureau, after he pulled out with a quad muscle injury.

It took over half an hour to trouble the scoreboard operators for the first time, Bosc, who had missed an early penalty, slotting home this time from over 40 metres.

Tickle had an immediate chance to level, only to fire wide.

But, a minute from half-time, the home side got the big breakthrough when, after fielding a Leon Pryce bomb inside his own 22, Shaul evaded a feeble challenge before setting off on his own for the line.

Unlike at Wembley three weeks ago, when his last length of the pitch effort fell just short in the Challenge Cup final against Wigan, this time there was no Josh Charnley there to overhaul him and Shaul registered his sixth and best try for the club in just seven appearances, Tickle adding the conversion.

Having gone in 6-2 up at the break, Hull saw their lead cut when Bosc drilled home another penalty on 56 minutes.

But the Black and Whites this time had the composure, and far better handling in the slippery conditions, to show they had learned their lessons from that defeat at Wembley.

They were helped by a touch of Catalan indiscipline two minutes later when Eloi Pelissier was seen to stamp on Aaron Heremaia's hand, allowing Tickle to restore Hull's four-point cushion with another penalty, to go 8-4 up.

That gave the home side the forward momentum again and Ellis, fit again after missing two games with the rib injury he suffered at Wembley, powered over to complete his side's elimination play-off victory.

Hull now face a trip next weekend to face either Huddersfield, beaten by Wigan on Thursday night, or the losers of Saturday's other qualifying play-off between runners-up Warrington and third-placed Leeds.

But, for Catalans, defeat at the KC Stadium signalled the end of the season - and, after 21 years' service to Manly, Northern Eagles, Bradford Bulls and Catalans, the final game of 39-year-old rugby league legend Menzies' career.

The Aussie, who is to return to his old club Manly to take on an ambassadorial role, thought he had at least bowed out with a try, but that was chalked off to compound his misery.

"We learned a lesson about a month ago about playing in these conditions.

"I can't doubt the courage and character of the group. There were players entitled not to be out there tonight. We are down on troops and there was a lot of courageous effort out there.

"It was a great team performance but I thought our senior players were terrific.

"Jamie Shaul is blessed with speed. He is nowhere near the finished product but I'm very happy with what he's doing. He's been sitting on the sidelines for most of the year and had to wait for an injury to get a start but he didn't drop his chin."

"It's an emotional dressing room. It's disappointing that we say goodbye in that way.

"We missed the vision of Scott Dureau and his kicking game as well.

"It's very disappointing that we couldn't execute, especially with all the possession we had. Hull defended pretty well, so credit to them. That's why they won."

On Steve Menzies: "He has been one of the best overseas players we've had at the Dragons, if not the best, and we wanted to give him at least one more week."