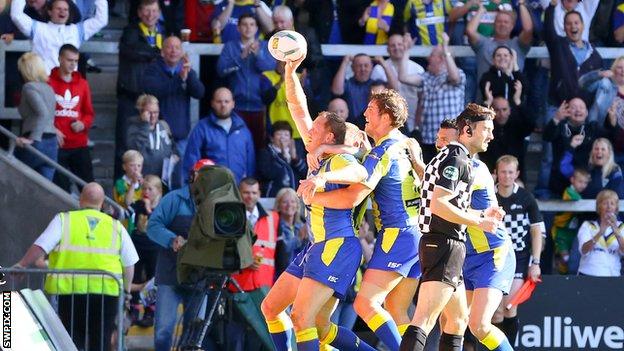 Ben Westwood scored four tries as Warrington Wolves overcame Leeds Rhinos to make it through to the last four of the Super League play-offs.

A brace from Westwood and a solo try from Simon Grix gave Wolves the lead at half-time, with Kallum Watkins and Kevin Sinfield replying for the Rhinos.

Westwood then crossed twice more after the break with Lee Briers and Ryan Atkins also on the scoresheet.

Warrington had won 11 of their final 12 Super League matches to finish second in the table and will now select their semi-final opponents under the 'ClubCall' system.

Meanwhile Leeds, who beat Wolves in the Grand Final last season, have a second chance to qualify for the semi-finals and keep their hopes of a third successive title alive when they play an eliminator next weekend against St Helens.

Wigan and Warrington have booked their place in the Super League play-off semi-finals with Huddersfield, Hull FC, Leeds and St Helens looking to join them.

The first half at the Halliwell Jones Stadium was a close affair and Warrington took the lead on six minutes when England forward Westwood latched onto a grubber kick from Lee Briers and spun away from Zak Hardaker to reach out for the line. Stefan Ratchford converted for a 6-0 lead.

Leeds replied and evened the scores when Rob Burrow straightened up his run and brushed off Simon Grix to set up a two-on-one with full-back Ratchford and fed England centre Kallum Watkins to score in the right-hand corner, with Sinfield converting.

Leeds then took the lead in controversial fashion when Burrow again was key in setting up an overlap and Ben Jones-Bishop supplied Sinfield with the pass to score. However Warrington were incensed by what they saw as two forward passes in the build-up.

A high tackle by Carl Ablett on Lee Briers then sparked a melee, with Briers perhaps lucky to remain on the pitch after seeming to throw a punch, although the incident was not put on report.

Wolves then regained the lead when Michael Monaghan sent Grix racing through and he dummied a kick to the corner which Leeds full-back Hardaker bought and Grix ran through to score, with Ratchford adding the extras.

The home side then extended their lead when Westwood was put clean through by a defence-splitting pass by Briers and, with little support, was forced to go on his own.

He fended off two defenders and appeared to ground the ball under the posts but the incident was referred to the video referee.

Warrington were given the benefit of the doubt and once Briers added the extras they went in 18-10 at half time.

After the break Warrington extended their lead when Michael Monaghan made a break from dummy half and found Westwood in support, who crossed to complete his hat-trick.

Briers then got in the act when the long-serving half-back capitalised when the ball went through Chris Hill's legs and touched down to the side of the posts and then converted his own try for a 28-10 lead.

Zak Hardaker reduced the arrears either side of Westwood's fourth try - first spinning through the tackle of Ryan Atkins to touch down and then slipping through a huge gap to plunge over from five metres out.

Westwood's fourth came following another grubber kick by Briers and Atkins scored Warrington's seventh when he capitalised on a loose pass from Sinfield and hacked the ball on to score under the posts.

"It was great for Ben [Westwood] to get some of the accolades. He works his cotton socks off every week doing the rough and tough stuff.

"He doesn't always get the spoils but today he got a bit of the cream and put a cherry on top.

"I know he didn't get Dream Team recognition but he's been in good form for months on end.

"I have no preference and I'm not going to participate in ClubCall. If they make me go, I will happily toss a coin."

"We finished a lot worse than we started. In the first 10 or 15 minutes we were not far way from where we needed to be but midway through the second half we were not there at all.

"Warrington were very good. Physically they dominated the game and executed some brilliant plays.

"We wanted to win and have next weekend off. Nobody wants to carry a loss through them in the play-offs.

"We've got to turn things around in training and develop a more steely attitude for the next game."