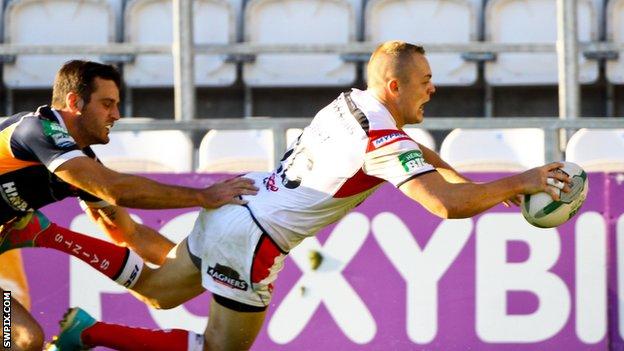 Adam Swift scored a hat-trick as St Helens ran in eight tries to secure a comfortable win over Hull KR in their Super League elimination play-off.

Rovers took the lead through Liam Salter but Saints scored six tries before the break to lead 34-4 and seize control of the game.

St Helens will face Leeds at Headingley next weekend in an eliminator for a place in the semi-finals.

Wigan and Warrington have booked their place in the Super League play-off semi-finals with Huddersfield, Hull FC, Leeds and St Helens looking to join them.

However, the home side, who had won six of their last seven games in Super League to finish fifth, took control of the game with three converted tries in the space of six minutes.

First Jonny Lomax fed Francis Meli, who broke through some weak defence and scored to the left of the posts, then a grubber kick from James Roby on the last tackle put Swift in for his first try of the afternoon.

Roby had a hand in the third, cutting through poor Rovers tacking and sending Sia Soliola away to touch down from 50 metres out.

After converting those three tries Jordan Turner then got in on the act himself just after the half hour when he picked up an offload from Lance Hohaia, who had dummied his way through the defence.

Tom Makinson then went over, with the video referee confirming the score before Swift got his second just ahead of the break when Lomax gathered a kick over the top and put him in.

The second half was comfortable for five-time champions Saints and their seventh try came midway through the half when Roby set up Hohaia.

Swift then sealed his hat-trick following good work from Lomax, Meli and Roby.

Rovers got a consolation try through Craig Hall six minutes from time. Dobson, who is departing Rovers for the NRL and Newcastle, scored his final points in Super League when he converted the score.

St Helens will now face defending champions Leeds Rhinos in the eliminators on Friday, while Huddersfield Giants will meet Hull FC on Thursday.

Wigan Warriors and Warrington Wolves await the victors of those two matches in the semi-finals, with Warrington the beneficiaries of the 'Club Call' system.

"I thought the first half was really pleasing and we came here expecting a really tough game. They are a big side with crafty players.

"Roby was great and you can't beat hookers like him in that kind of form. It's a crucial spot and not to have him makes it a lot harder.

"We were playing well on the right edge and we got it going.

"We have some confidence now. We have a big task against Leeds but we should go there thinking we can do okay.

"The guys want to do well and it will be a really good game. We want to stay alive and give ourselves a good shot at Old Trafford."

"Saints were way too good, too big, too fast and too classy. They were full strength and we were missing eight regulars.

"We missed Cory Paterson who burst his appendix yesterday - what can you do?

"We didn't perform. We had too many errors. They were way too good for us.

"We made some very poor defensive mistakes but to the guys' credit the second half wasn't too bad but we didn't perform in the first half. The game was over by that point."