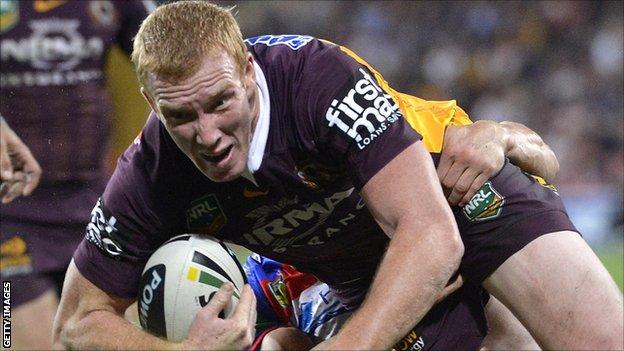 The 25-year-old, who made a try-scoring debut against France in October 2011 and has five caps, was hurt in the win over Canterbury last week.

Keighley-born Reed has been a regular for the NRL club, scoring seven tries with 21 appearances in 2013.

England kick off the World Cup against Australia in Cardiff on 26 October.

Reed was one of a number of Australian-based players likely to be included in England coach Steve McNamara's plans for the tournament.

Melbourne Storm half-back Gareth Widdop, who is set to join St George-Illawara, was also a doubt with a hip problem, but made a successful return for the Easts Tigers in the Queensland Cup to boost his hopes of making the squad.

South Sydney's quartet of Luke, Sam, George and Tom Burgess, Canterbury prop James Graham and Cronulla second-row Chris Heighington have also been in and around the squad.

Prop Lee Mossop is to join Parramatta Eels for 2013 after the 2013 season with Wigan ends.

Carl Ablett and Kallum Watkins of Leeds Rhinos, Huddersfield's Leroy Cudjoe and Hull FC's Ben Crooks could all be in contention to fill the gap left by Reed's injury.