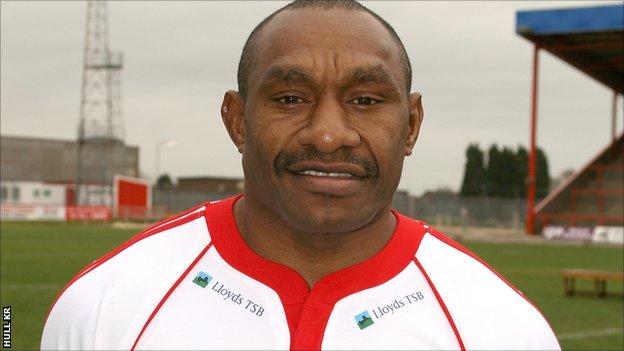 Gateshead Thunder head coach Stanley Gene says players with Super League ambitions could be rewarded if they turn in good performances next season.

Gene will divide time between Gateshead and Super League Hull KR where he is a coach under Craig Sandercock, with the two clubs in a partnership.

"If anybody at this club plays well, I will recommend them to Hull KR," 39-year-old Gene told BBC Newcastle.

"I want players to come to Gateshead and play well."

The relationship between Rovers and Thunder was strengthened last season through a dual-registration arrangement that saw first-grade players such as Chris Heil, Omari Caro and Sam Latus spend time on Tyneside.

Rovers winger Caro in particular was a success at Gateshead, finishing the season with 15 tries in 18 games across Super League, Championship One and the Challenge Cup.

"There's no reserve grade now for Super League clubs, while there are 23-24 players in a squad and you can only pick 17," he said.

"You have to play games to get match fitness, and this happened with Gateshead, who have been good to us in letting kids play."

Compared to Hull, the north east is far from a rugby league heartland, despite a burgeoning amateur game.

However Gene, who once signed for Thunder before their merger with Hull in 2000, is enthused by the opportunity to spread the message.

"It's a club in a place where rugby league is not played as much and it's a great challenge to come in and change the club and take them to a better place." he added.