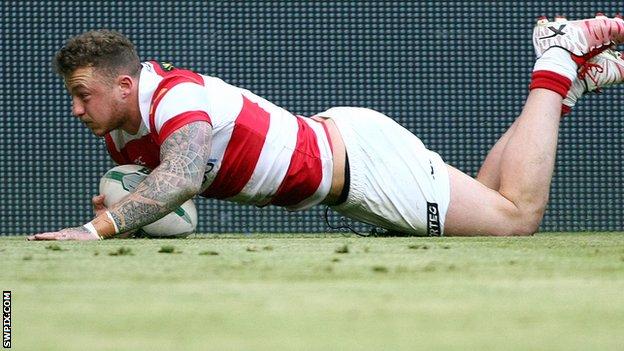 Wigan head coach Shaun Wane has paid tribute to Josh Charnley, who is the first player to score 40 tries in a season during the Super League era.

Winger Charnley passed the previous record of 39, jointly held by Lesley Vainikolo and Danny McGuire, with two tries against Huddersfield on Thursday.

"He's getting what he deserves - and he's scoring tries for fun for us," said Wane.

Of Josh Charnley's 41 tries in 2013, 32 have come in Super League and the other nine in Wigan's run to the Challenge Cup final, although the Wembley victory over Hull FC in August was the only cup tie in which he failed to score.

Wigan's took them to within one win of the Grand Final.

The 22-year-old's 40th and 41st scores of the campaign put the Warriors in control against the League Leaders' Shield winners in their qualifying play-off, before Blake Green's late effort secured a semi-final spot.

Wane told BBC Radio Manchester: "He [Charnley] has been consistent and he trains the way he plays. He's a great advert for any young kid wanting to play the game.

"The way we completed our sets and played at the right end of the field in difficult conditions - those were the quality things that we did and were the telling factors.

"Everybody said we were going to lose the game and that was a great motivating factor for the team. But everyone inside the dressing-room all knew that if we played the way we can, we could win the game and we proved that."