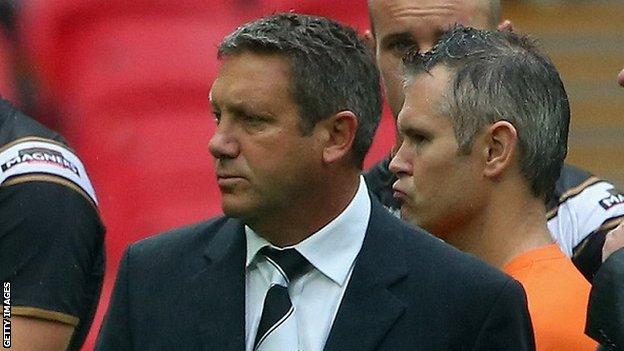 The Black and Whites face a Giants side smarting after losing to Wigan in the first round of the play-offs last week.

But Gentle told BBC Radio Humberside his players are ready to turn the tables on a team that has already beaten them twice this year.

I'm pleased that everyone got to see what I see every day, that the character in the squad is second to none

"It comes from within, we're developing a very good culture here," he said.

Gentle has come under fire at times this season, and some reports claim FC owner Adam Pearson has already decided to replace the Australian. But after beating Catalans last week the Airlie Birds are just two wins away from reaching the Grand Final.

"I'm pleased that everyone got to see what I see every day, that the character in the squad is second to none," said Gentle, of the performance against the French club.

"We have to be better again now - we have Huddersfield, the league leaders, the best team in the competition, but we'll give it a shot because this squad is very tight, very skilful and willing to work hard for each other.

"Huddersfield won the League Leaders' Shield for a reason. Danny Brough conducts them brilliantly and I think they have been very fortunate this season in that their numbers nine, six, seven and one, the spine of the side, have between them missed just eight games this year.

"So they'll be expecting to win, but so will we. We have good memories of the stadium from the last time we were there, when we beat Warrington in the Challenge Cup, and we're looking forward to going back."

Full commentary of Huddersfield Giants vs Hull FC in the Super League play-offs is available on 95.9FM 1485AM, DAB Digital Radio & Online at www.bbc.co.uk/radiohumberside