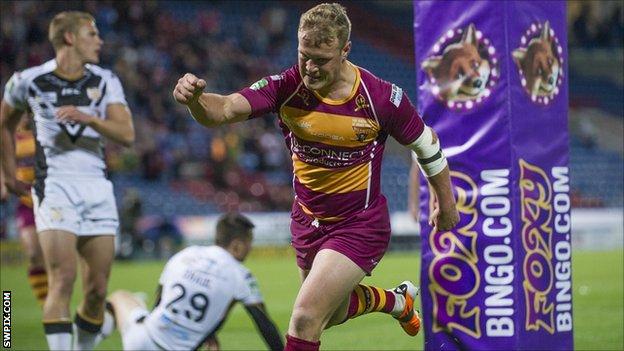 Jamie Shaul's effort and two tries from Tom Briscoe were the visitors' replies.

Widnes-bound Danny Tickle kicked three goals for Hull, who unceremoniously tumbled out of the knock-out series.

Warrington or Wigan await the Giants in the last four, with the former making the initial selection in the Club Call.

Huddersfield showed their mettle with a ferocious start that they maintained throughout a dominant first-half - something they failed to achieve in last's week's humbling by Wigan in the opening play-off round.

It took two minutes to open up the visitor's defence, as Craig Kopczak offloaded in midfield, Shaun Lunt ripped through and after he was stopped by Jason Crookes, the ball was worked right to Dream Team member Leroy Cudjoe who strolled over for the first score.

Their lead was extended four minutes later when Brough's kick in behind was snapped up by the Robinson who left the defence flat-footed as he touched down and a third try followed soon after when Grix sprinted the length of the field after Joe Wardle's break.

Robinson tore through another weak left-side defence to score again soon after and with Hull's line in tatters, the Giants took advantage again when Cudjoe waltzed through ineffective cover before teeing up Grix for a second.

Murphy touched down before Shaul added a score against the run of play when he was first to Holdsworth's kick after it rebounded off the post, but another Brough kick created havoc and Robinson was first to the ball for try number seven.

Try eight from Lunt, who profited from another Wardle break, and a ninth from Robinson completed a miserable 40 minutes for the Airlie Birds who trailed 54-6 when the half-time hooter sounded.

The furious scoring rate slackened somewhat in the first part of the second period which also saw Shaul limp off after a big hit from Jermaine McGillvary, but Cudjoe got the scoreboard ticking over again with his second try.

Hull responded through the departing England winger Briscoe, whose pair of tries took his career tally to 100.

But Huddersfield restored momentum with Lunt's second and tries from Ferres and Kopczak took them past 70 points while Brough also overtook the record 332 points scored by Pat Devery in the 1952-1953 season.

"It was the manner of our victory that was especially pleasing. It was special and for 40 minutes we were ruthless. When you are on such a roll, you become hard to stop.

"We haven't done anything different to what we've done all season. There was a collective understanding that last week wasn't good enough. We had to put it right and we did. The score was irrelevant. I feel for [Hull coach] Peter [Gentle] and I can sympathise with him because this time last year I was in his shoes.

"Hull have had a long season, reaching the top six and the Challenge Cup final, and next week will be the first one they're going to have off. They showed in the second-half what they are capable of."

"One hundred per cent it's my lowest point. It's a bitter pill to swallow. I am very disappointed for the fans who paid good money to watch that. One side was white hot and the other was not at the races.

"We've been running on empty for a few weeks - last week we dug deep and found a way to win but this was a game too far, although that's no excuse for what happened."

"Huddersfield were in a similar situation to this last year at the KC when we put on nearly 50 points but they have turned their whole season around. There is a prototype there. We have a chance to do the same thing."