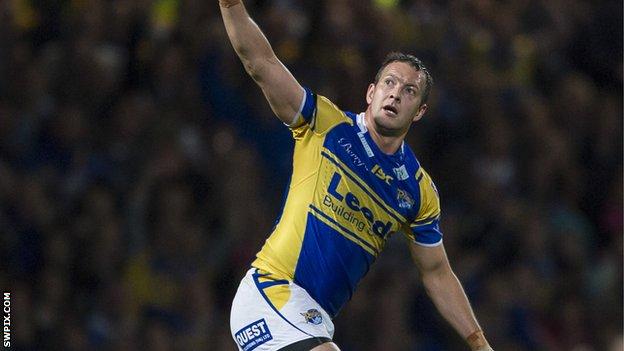 In a tight first half, the hosts' Kallum Watkins provided the only points when he slid over in the corner.

Jon Wilkin scuffed a drop-goal attempt and McGuire struck with three minutes left to put Leeds into the last four.

It means that for the first time since the eight-team play-off was introduced in 2009, the league table's top four sides - Huddersfield, Warrington, Leeds and Wigan - will face off in the last week of the Super League season.

Leeds skipper Kevin Sinfield has scored points in 16 consecutive games against St Helens, a streak which started in the 2008 Super League Grand Final. He last failed to score in the 2008 qualifying semi-final at Knowsley Road, where he missed his one goal attempt in a 38-10 defeat.

Although on paper the result was the antithesis of the previous day, this match was every bit as much a classic elimination play-off.

All the early play came from Leeds but Saints threatened on the counter, Louie McCarthy-Scarsbrook going closest when he was rolled onto his back when over the try-line. But the Rhinos drew first blood midway through the first half, moving the ball wide to Watkins who threw a clever dummy and barged his way over in the corner.

At first glance, the centre looked to have dropped the ball but video referee Ben Thaler awarded the try.

The official was not so generous when McGuire was convinced he had doubled Leeds' advantage just before the break, however, concluding that the half-back's outstretched arm was not in control of the ball when it hit the whitewash.

St Helens started the second half sluggishly and were made to pay by Moon, who gathered McGuire's inch-perfect grubber kick to slide over, Sinfield adding the two points after missing his first conversion attempt.

But that try seemed to signal a switch in the game, as first Rhinos forward Mitch Achurch spilled the ball on his own try-line, and then once Leeds had ridden out the pressure, Jamie Peacock did exactly the same. And the second time, Saints made them pay as Wilkin played in Manu who crossed from close range.

After Jordan Turner improved Manu's score, St Helens poured on the pressure and Leeds centre Watkins cracked. His high tackle deep in the visitors' half gave Saints the chance to kick downfield and they took full advantage of the field position. A flat, late pass from Wilkin played Manu in on the 20-metre line and he burst through to score.

But Turner pushed his goal wide of the posts and although the usually dependable Sinfield then hammered his kick-off straight into touch, allowing Wilkin to position himself for a drop-goal attempt, his effort was sliced to the right of the sticks.

Moments later Leeds found themselves in a near-identical position at the other end of the field and after Sinfield drew three Saints defenders who seemed to be expecting the Rhinos skipper to go for the one-pointer himself, he off-loaded to McGuire who made no mistake to book a spot in the final four.

Leeds will learn their semi-final opponents on Sunday when Warrington - who earned the right to select their opponents via the Club Call system - make their choice.

"We had a lot of pressure near their try-line for the majority of the first half and it would have been nice to score more points.

"But I can't speak highly enough of St Helens - they didn't leave anything in their tank.

"Obviously when you lose, the season is over and it's very disappointing but I'm really proud of our guys.

"You couldn't fault the effort from both sides.

"It was what proper semi-final football is all about - the commitment and effort from both teams was super."