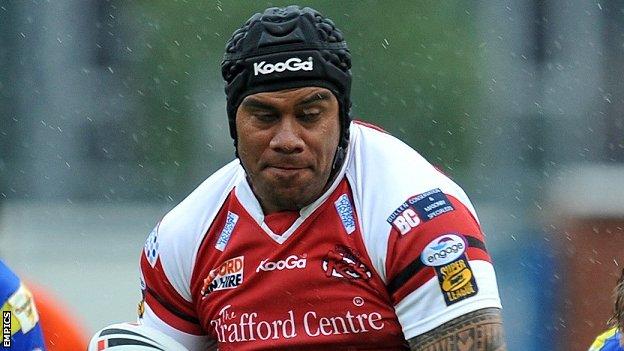 Samoa-born Paleaaesina, who has also represented his homeland, joins from French championship side Limoux.

The 31-year-old will link up with the Black and Whites for the start of pre-season in November and joins fellow new signing Mickey Paea in the front row.

Speaking to the club website Paleaaesina said: "I can't say how excited I am to play for Hull."

He continued: "We have a good squad and Mickey Paea coming in is a very good signing too, but for me Danny Houghton is the key. I'm a massive fan of Danny's and I've watched this season as he's ripped it up for Hull."

Hull head coach Peter Gentle said: "We're running with quite a young squad next year and losing a few senior players, so Iafeta's experience will be great for us, he understands what it takes to play in Super League.

"I've never seen him look fitter or more determined, he's almost unrecognisable from the player we saw a few seasons ago in Super League, but he still has that physical intimidating presence we've seen him show both in the NRL and here.

"He comes with a bit of a point to prove which will make him eager to impress and it's very pleasing to know he has turned down interest from elsewhere to opt to join us."

Paleaaesina left Super League last year after a spell with Salford. He made almost 150 appearances for Wigan between 2006 and 2010 after arriving in England from New Zealand Warriors.

Internationally he represented the Kiwis before switching allegiance on heritage grounds to Samoa for the 2008 Rugby League World Cup.