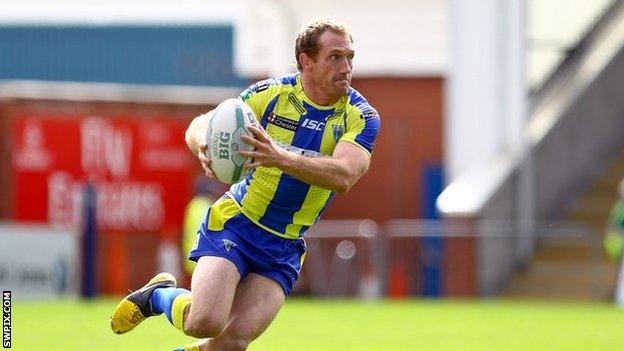 Michael Monaghan has revealed he was set to retire from rugby league before extending his stay at Warrington.

The Australian hooker was with the Super League club last month.

"I thought enough was enough," said the 33-year-old, who missed three months of the 2012 campaign following

"But I spoke to the club and [head coach] Tony Smith and he thought I still had a little bit left to offer."

Monaghan told BBC Radio Manchester's Rugby League Extra: "I've got on top of the injuries and decided to have another crack next year and hopefully regain some of the form I've had in previous years."

He is in his sixth year at the Halliwell Jones Stadium after joining Warrington from Manly Sea Eagles at the start of the 2008 season.

Team-mate Micky Higham has also impressed in the role of hooker this term and Monaghan says there is healthy competition between the two veterans.

"It's the strength of our club at the moment that we've got a lot of good players in key positions. He is our player of the year and that's a reflection on how his season has been."

The Wolves have of the Super League play-offs and