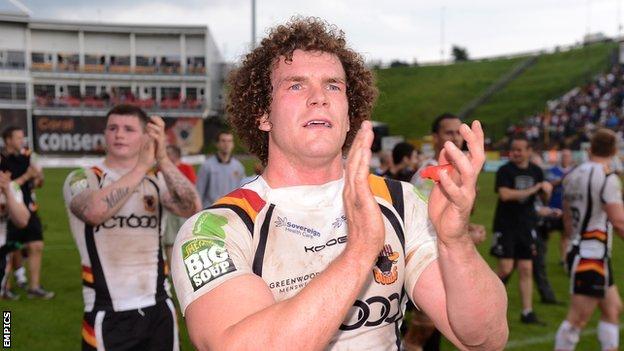 Bradford's longest-serving player Jamie Langley will join Hull KR in 2014 on a 12-month deal with an option for another year.

The 29-year-old loose forward has spent 13 seasons at the Bulls but was not offered a new contract.

"Jamie is an outstanding person both on and off the pitch," said Robins coach Craig Sandercock.

He is the club's fourth signing for next season along with Michael Weyman,Neville Costigan and Kris Keating.

Sandercock continued: "With us having so many young players in our squad I thought it was important to bring someone in with plenty of experience and Jamie certainly fits that bill.

"The fact that he's played over 220 Super League games bears testament to that and Jamie is a very good player whose experience and leadership will benefit our club enormously."

Langley won the Super League Grand Final with Bradford in 2005 and was in the Bulls side that lifted the World Club Challenge in 2004 and 2006.

He said: "After my last game at Bradford I was looking to get something sorted pretty quickly. I'd met with Craig previously and got on really well with him.

"I was impressed with what he had to say and the direction in which the club is going. They had a good year this year getting into the play-offs and have made some very good signings for next season.

"There are also a lot of good, young players in the squad and I'm looking forward to getting involved and hopefully having a positive influence on both the team and the club."