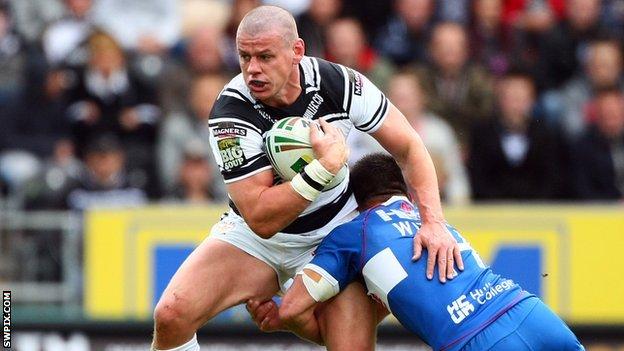 Gentle was relieved of his duties on Tuesday after the club suffered a 76-18 defeat by Huddersfield in the Super League play-offs.

At the age of 34, Radford becomes the youngest head coach in Super League.

"For those who have known Lee Radford for some time, his appointment as head coach of Hull FC is no surprise. Radford has always had a passion for coaching. A decade ago could be found on a small recreation ground passing on his knowledge to the amateurs of East Hull. This was no passing fancy. He progressed from youth coaching to running the seniors for most of his playing career spent mainly at Bradford Bulls before a switch to Hull FC in 2006. East Hull won the National Cup for amateur sides that season and Hull FC hope some of that success rubs off on them."

He spent two years on the coaching staff at the KC Stadium and made over 200 appearances for the club before retiring at the end of the 2011 season.

"It's a massive honour and a massive responsibility," said Radford. "It's obviously a huge chapter of my life and it's not decision that has come easy to me. I'm fully aware of how massive a job it is."

Radford will be assisted by Andy Last, while former New Zealand international Motu Tony has been appointed as the club's football manager.

The Airlie Birds reached the Challenge Cup final and finished sixth at the end of the regular Super League season in 2013.

But they were beaten 16-0 by Wigan at Wembley and humiliated by the Giants in the preliminary semi-final, leading to Gentle leaving his post with two years left on his contract.

Owner Adam Pearson said: "We've got some great young players and we feel we need home-grown coaches to bring that talent through.

"We feel we need a leader to instil fear into the team and bring consistency into the side. They cannot just turn up when they want to.

"I want to be challenging for cups and Grand Finals. There is nothing wrong with having that ambition, but we need to give Lee resources.

"We have lacked an attacking identity all season and that is one of the major things we want to put right.

"The easy and cheap decision would have been to leave Peter Gentle in charge but feel the time is right for a change of regime."