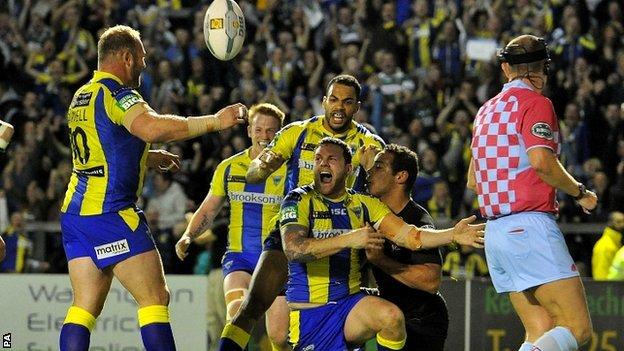 Joel Monaghan and Simon Grix scored two tries apiece for the Wolves, who led 18-10 at half-time.

The Giants stayed in touch until Grix's second score with five minutes to go.

Wigan host champions Leeds on Friday for the right to meet Tony Smith's side at Old Trafford on 5 October.

After suffering Grand Final heartache against the Rhinos less than 12 months ago, the Wire will get another chance to claim their first domestic title since 1955.

Warrington had used the Club Call system to select Huddersfield as their semi-final opponents and, having been victorious in the last eight meetings between the two sides, including on three occasions this season, the Wolves went in as favourites.

After his brace against Huddersfield, Warrington winger Joel Monaghan now has 25 tries in Super League this season. Only Wigan's Josh Charnley has scored more with 32.

However, with a coveted Grand Final spot at stake, early nerves were evident from both teams.

Giants second-rower Brett Ferres gave away a cheap penalty after two minutes, from which Warrington worked the ball out wide to Monaghan to score the game's opening try.

But Danny Brough, Huddersfield's inspirational skipper and one of three nominees for the 2013 Man of Steel award, soon restored parity.

His initial break from his own 10-metre line came to nothing, but having regained possession, the half-back pounced on some ponderous Warrington defending under their own posts to level the scores.

Teenage full-back Jake Connor marked only his second Super League appearance with his second score in Giants colours, evading Chris Riley and Ryan Atkins to dive over in the corner.

But Huddersfield's lead was short-lived and it would be Warrington who would take an eight-point advantage into the interval with two quick tries before the break.

Winger Monaghan grabbed his second score of the match in almost identical circumstances to his first, taking his tally in Super League this term to 25, before the versatile Grix touched down Richie Myler's grubber kick.

The home side carried that impetus into the second period as centre Atkins superbly collected a high cross-field kick from Lee Briers to extend the lead further, but Jermaine McGillvary's immediate response kept Paul Anderson's Giants within two scores.

Home nerves were frayed further when, with 10 minutes to play, Dale Ferguson barged his way over from close range to reduce the deficit to two points.

But as Huddersfield searched for a winning score, Grix kept a calm head to pouch a loose ball and secure Warrington's return to Old Trafford.

"It was a tough old game, that's what we expect at this time of year. We were a bit off in some areas. I didn't think we were composed tonight, we didn't quite control the game like have in recent weeks but part of that was down to Huddersfield.

"They are a dangerous team and they threw a bit at us. I thought the effort was there but our kicking game was poor in the first half. I thought we were a bit edgy as if we were trying too hard to get the game put to bed too early.

"We managed to get through and we'll take our lessons from it into next week."

"The best team won tonight. We didn't get ourselves into enough opportunities near their try line.

"We gave them too many metres and they beat us around the ruck, which is something we'll have to look at."