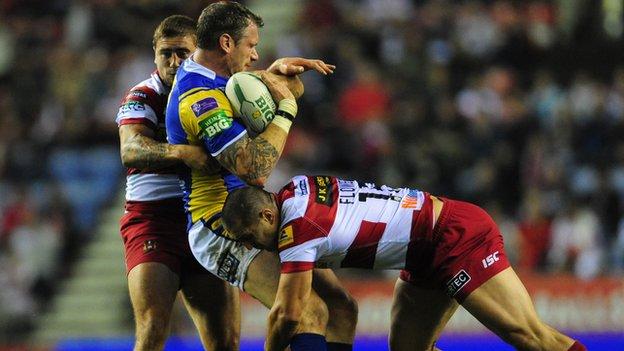 Iain Thornley scored early on for the hosts, who are 80 minutes away from the first double since St Helens in 2006.

Second-rower Jamie Jones-Buchanan, one of the Leeds players who defied injury to play in their biggest game of the season, came off eight minutes before half-time. His knee injury could scupper his chances of playing for England in the World Cup.

Leeds got back on terms at the start of the second half with Joel Moon's try.

But Liam Farrell, Darrell Goulding and Josh Charnley crossed to send the Warriors, winners in 2010, back to Old Trafford after a three-year absence.

It has been seven years since a team won the Super League and the Challenge Cup in the same season. But, having beaten Hull FC at Wembley in August to lift the first silverware of the campaign, Shaun Wane's men are just one win away from emulating Saints at Old Trafford.

And England full-back Sam Tomkins, who will join NRL side New Zealand Warriors for a world-record £700,000 fee at the end of the season, now has the chance to sign off his career in cherry and white in style.

But, for Leeds, champions for the last two seasons, hopes of a sixth title in seven years and a third in succession are over.

The two sides had met in the last four almost a year to the day previously and, on that occasion, Kevin Sinfield's clinical kicking display had been enough to see the Rhinos progress by a single point.

In a similarly cagey opening 40 minutes back on the same DW Stadium stage, Thornley's early effort was the only score.

The Wigan centre had already forced Leeds winger Ben Jones-Bishop to spill the ball within sight of the whitewash before he crossed himself at the other end, rounding off a move involving Tomkins and Pat Richards, another who will saying his fond farewells as Old Trafford next Saturday night as he prepares to return to Australia.

An interception and length-of-the-field dash from winger Richards almost led to a second try for the hosts just before the interval, but he was brought down by Rhinos prop Ian Kirke 30 metres out.

Otherwise, defences were largely on top during a half in which avoiding costly errors became the chief concern above expansive attacking.

In contrast to the first half, it was the visitors who experienced early joy at the start of the second period to level things up at 6-6 as Carl Ablett, a try scorer in the Rhinos' 20-6 win at the DW Stadium three weeks earlier, burst through Harrison Hansen's limp tackle to send centre Moon over the whitewash.

Now 12 points adrift with a quarter of the match to play, Leeds had to take chances. Rob Burrow tried to inject some impetus, his jinking run creating space for Moon, who easily side-stepped Tomkins but was spectacularly denied his second try of the game by second-rower Hansen.

And the hosts exploited the gaps on offer in the closing stages, Charnley crossing unopposed for his 42nd try of the season to make the game safe, meaning Liam Sutcliffe's late try was merely a consolation.

In an all north-west Grand Final, Wigan will go in search of their first title since 2010, while Warrington - who saw off League Leaders' Shield winners Huddersfield in the other semi-final on Thursday night - are hoping to be crowned domestic champions for the first time since 1955.

"I'm very happy. I don't think we were at our best but we did enough to win. I just knew if we stuck to our plays, we would get them.

"We need to improve. I don't think the week off did us any good. We were a bit underdone - but it was a tough arm wrestle tonight and it has put us in good spirits for next week.

"It was a gritty performance, which is what you need in a semi-final. I thought we defended tough. Leeds are a good team, they can play.

"There is still a lot of work to be done. Warrington are a great team but there are areas where we can improve."

"Wigan came out fast, They looked more energised at the start. We were on the back foot right from the off, we never seemed to get a grip on the game.

"We had a big dig. We were never far off but we always seemed to be a yard behind.

"We could have been smarter but, in terms of effort, we couldn't have given any more. "I'm a proud man in charge of a disappointed team.

"JJB shouldn't have been on the field. His ligament is hanging on by a thread. It's up to Jonesy whether he's available for the World Cup. "