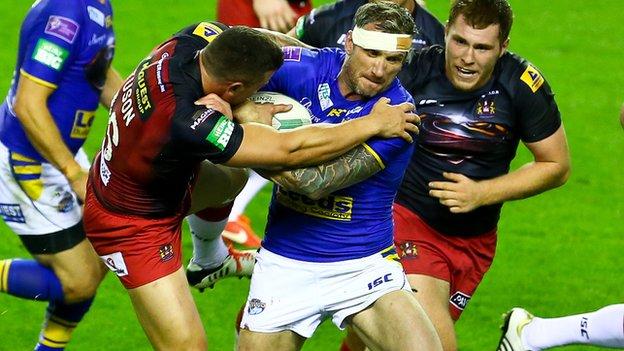 The Rhinos, who beat Wigan at the same stage last season thanks to a Kevin Sinfield drop goal, are looking to reach a third successive Grand Final.

"It doesn't get much bigger than this," McDermott told BBC Radio Leeds.

"It's two teams with a huge amount of drive and desire to get to the Grand Final - and I'm sure it will be an epic match."

This will be the 11th time the two teams have met in the Super League play-offs. Both teams have won five encounters so far.

He continued: "We got over the top of them when we went there in the league a few weeks ago and I'm sure the intensity will be the same on Friday.

"Defensively they're very shrewd and very mean. I don't think it will be a high scoring game. I'm sure it will come down to a dramatic finish.

"We know what it feels like at Old Trafford and we desperately want to be there again. We're going to have to spill our guts, sacrifice ourselves and give everything."

Leeds won the Grand Final in 2011 and 2012 after finishing fifth in the regular season, but despite finishing third this term, McDermott believes it would be a greater achievement for his side to get to Old Trafford this year.

"We've been through the mill this year," he said.

"We've been very consistent in the main part but we've been ravaged by injuries to key players.

"We put out makeshift teams that probably shouldn't have got some of the results that they did.

"That we've finished third and are now 80 minutes from the final is a testament to the effort of everyone here. It's remarkable."

Wigan players Pat Richards and Sam Tomkins could be making their last appearances for the club ahead of moves to the NRL.

And McDermott praised the impact the duo have had on the English game.

He added: "We are mindful of the players they have leaving.

"Pat Richards has been one of the best overseas signings Super League has ever had and Sam Tomkins is one of the most talented players we've produced in this country. They'll want to go out on a high.