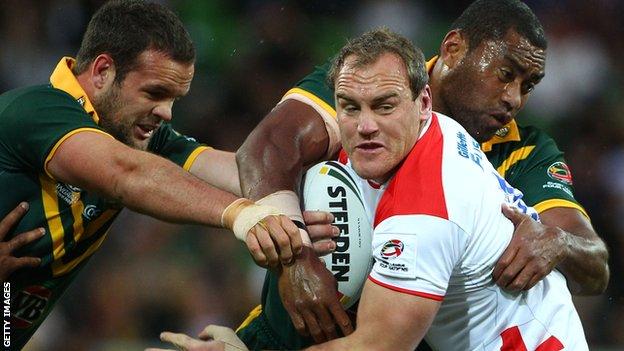 Gareth Ellis is retiring from international rugby only a month before the 2013 Rugby League World Cup begins.

The Hull FC second row, 32, was expected to be part of Steve McNamara's England team for the tournament.

Ellis has 22 England caps and has appeared 17 times for Great Britain.

"It's a tough call to make. It allows me time to rest and recover before a full pre-season, something I haven't done since 2002, and hit the ground running in 2014," he said.

"It's something I've been thinking about for a long time.

"I was always very proud to represent England, it will be extremely disappointing to miss the World Cup.

"I feel this could be the strongest England team for some years, but after 12 years I've had my opportunities on the international scene and I want to focus on a big year for Hull FC."

Ellis captained Hull FC to the Challenge Cup final in August, where they lost 16-0 to Wigan. The club also made it in the Super League play-offs.

"It's no secret that I'm heading towards the latter part of my career and after picking up untimely knocks over the last couple of years, I feel it is time for me to focus on my club," he added.

"We made it to Wembley this year which was a great achievement, but I want to be there again next year and the year after.

"I want to be able to play my part for the club week in and week out, and make a contribution to help us achieve things.

"I feel the best way for me to do that now is to retire from international rugby."

Ellis joined the Black and Whites in November 2012 on a three-year deal from Australian side Wests Tigers. He previously played for Leeds Rhinos.