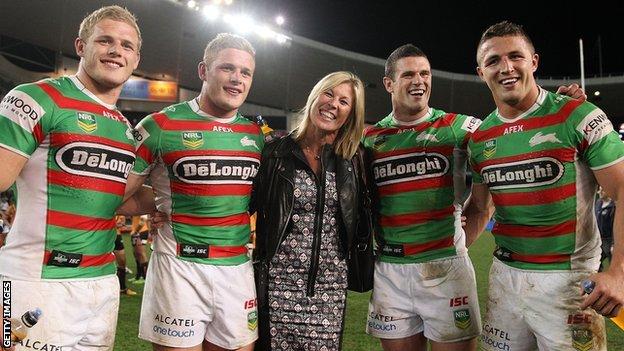 England have named three Burgess brothers in their 24-man squad for the 2013 Rugby League World Cup, which starts later this month.

Twins George and Tom, 21, the only uncapped players in the squad, received call-ups alongside older brother Sam, 24.

All three play for South Sydney Rabbitohs after starting their professional careers at Bradford.

England coach Steve McNamara stopped short of naming all four siblings, though, as 26-year-old former Leeds prop Luke, who also plays for the Rabbitohs in the NRL, missed out.

"Luke will be disappointed, but I'm sure he'll be happy that three of the four are included," McNamara told BBC Radio 5 live.

"It would have been a fairy tale if all four [brothers] were involved, but it's not my job to do that.

"George, right from the start, has been sensational. He's blossomed. Tom has pretty much been the same. All three will bring a lot to the squad."

George has just been named the Dally M rookie of the Year 2013 as the best young player in the NRL.

Leeds Rhinos skipper Kevin Sinfield will lead a squad looking to become the first home nations team to win the World Cup since 1972, when Great Britain edged Australia in the final league placings.

Sam, George and Tom Burgess will be aiming to emulate the Henderson brothers - Kevin, Ian and Andrew - who all played in the 2008 World Cup for Scotland

Richie Myler, who has reached the Grand Final with Warrington and played for England against the Exiles in June, is also left out, along with 36-year-old club-mate Adrian Morley.

Australia-based Gareth Widdop is included and completes a remarkable recovery after dislocating his hip in June.

"Sean is so important to the group and we wanted to give him every opportunity to be fit," added McNamara. "I'm very confident he will be fit."

England, who finished third in the last World Cup in 2008, start their campaign on 26 October against Australia in Cardiff before moving to Huddersfield, where they face Ireland on 2 November.

They round off their Group A campaign against Fiji in Hull on 9 November.

McNamara said: "We are fully aware that the tournament will be fiercely contested and that this squad will need to work extremely hard and play to a very high level to win it.

"As we have seen in previous tournaments, we will need all members of the squad ready to step up and make vital contributions.

"We feel that all 24 players have the ability to do that.

"To have a World Cup on home soil is a massive opportunity for the sport and I hope the public will turn up in their numbers and show their support for England."

New Zealand are the reigning champions, having beaten Australia 34-20 in the final five years ago.