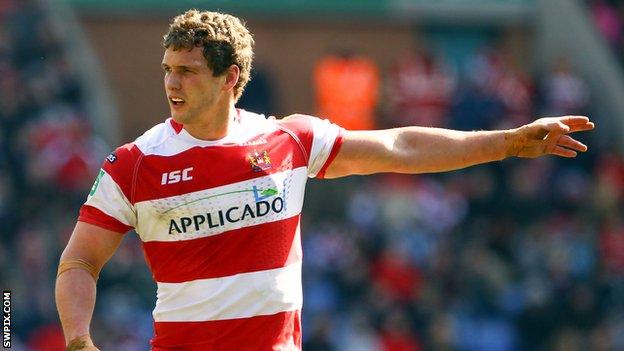 Wigan are anxiously waiting to discover if captain Sean O'Loughlin will recover from an Achilles injury in time to face Warrington in Saturday's Grand Final.

England international O'Loughlin had a protective boot removed on Monday.

"He's an outstanding captain who brings a presence on the field. If he had any chance of playing, he definitely would," said second-rower Liam Farrell.

Loose forward O'Loughlin, who has been included in was one of three nominees for the 2013 Man of Steel award, but

Wigan's slump in the second half of the season coincided with the start of his injury problems, although Shaun Wane's men bounced back to defeat and in the play-offs without their captain.

If O'Loughlin is not fit enough to return at Old Trafford, full-back Sam Tomkins will lead the side in his final game for Wigan before

But every Wigan player is desperate for O'Loughlin to play, with 23-year-old Farrell telling BBC Radio Manchester: "Sam would admit this himself - people talk about how we miss Sam when he doesn't play, but he would admit that the person we miss the most in that team is Sean."

Farrell has also been named in Steve McNamara's World Cup squad and is set to make his second appearance in a Grand Final on Saturday, having appeared as a replacement in Wigan's 2010 victory against St Helens.

"It was my debut year, I ended up playing a lot more games than I expected and finished off with a win in the Grand Final," he said.

"I was very nervous then - I was sat on the bench and I couldn't keep still. This is going to be a different occasion this time. I've always wanted to be in a Grand Final where I've started and hopefully I'll get my chance this week."