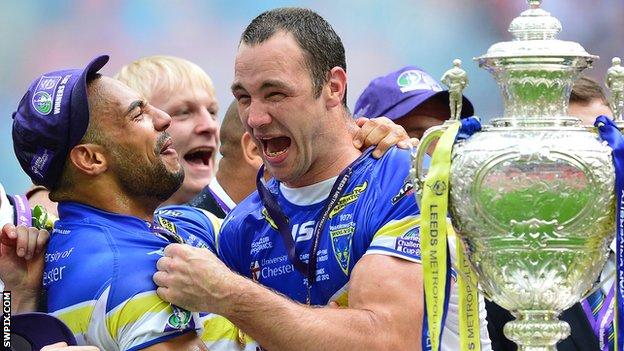 Departing captain Adrian Morley says he has been proud to have been part of Warrington's emergence as a Super League force.

next season, ending his seven-year association with the Wolves.

He will lead the Wire in Saturday's Grand Final against Wigan Warriors.

"When I signed, I believed in [owner] Simon Moran's vision and optimism. To be part of the rise of Warrington has been incredible," said Morley.

The 36-year-old told BBC Radio Merseyside: "We've won the Challenge Cup a few times, the League Leaders' Shield [in 2011] and this [winning a Grand Final] is one thing we've not done.

"We've made the Grand Final but we need to tick the victory box. To do that on Saturday would be pretty special."

Warrington, who are aiming to win their first league title for 58 years at Old Trafford, had been perennial underachievers until Moran took ownership of the Wolves in 2003.

His investment in the playing staff, including bringing Morley back to England in 2006 after a spell playing for Sydney Roosters in the NRL, has helped Warrington become one of the top teams in the country.

Before moving to his home-town club in 2014, Salford-born Morley says he would take a huge degree of personal satisfaction in ending his Warrington career by landing the Super League crown.

"It would be the icing on the cake, definitely," he said. "Just making the Grand Final is an achievement, and to play in the Grand Final for my last game is great, but to get the win would be a bit special."

Morley is hoping to win the Grand Final for the second time in his career, having also won the trophy in 2005 during a short stint at Bradford.

He had joined the Bulls on a short-term deal and played in their 15-6 win against Leeds, his first professional club, although he admitted that the victory was a hollow one for him.

"I wouldn't change the Bradford experience by any means, but it didn't feel quite right to me because I didn't come in until the end and I only played the last six games," added Morley, who has appeared more than 50 times for Great Britain and England.

"I've been with these boys for seven years. This would be the right way."

Warrington, who were by Leeds, defeated and in the play-offs to book their return to Old Trafford.