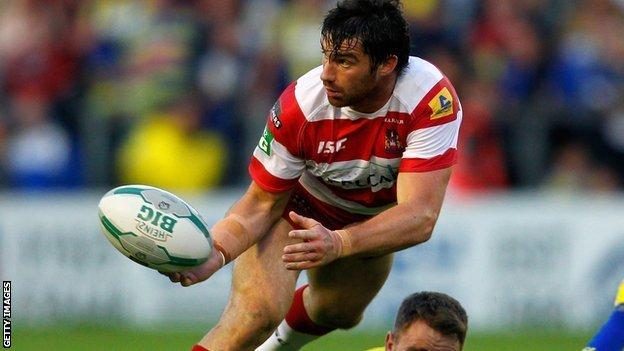 Wigan half-back Matty Smith has set his sights on becoming the first player to win man-of-the-match awards in both domestic finals in the same season.

Smith was crowned the Lance Todd Trophy winner in the Challenge Cup final at Wembley, where Wigan defeated Hull FC.

And he can make it a unique double when his side face Warrington in the Grand Final at Old Trafford on Saturday.

Did you know? Smith was at Everton at the same time as Wayne Rooney, James Vaughan and Victor Anichebe before being released by the Toffees at the age of 15

"It would be amazing to win both man of the match trophies. It has never been done before," Smith told BBC Sport.

Former Wigan stars Kris Radlinski and Jason Robinson have won both awards, but as yet it has never been done in the same campaign.

With Shaun Wane's men looking to complete a double of their own by winning the Super League title to go with their cup victory - a feat not achieved since St Helens in 2006 - Smith is confident in his own ability and is pleased at how he has performed this season.

"It is a team game, we set our sights on winning both cups at the start of the year and to do that would be fantastic," he said.

"I was not sure who would win between Wigan and Leeds last week and I cannot call this one either.

"From an England perspective there are six players from Wigan and two from Warrington [in England's World Cup squad] but that does not tell the whole story.

"Warrington have got a couple of old stagers like Adrian Morley and Garreth Carvell who just missed out with England, then a couple of the younger boys like Stefan Ratchford and Richie Myler who could easily have been selected.

"I think it is a very even match-up between the English boys. It could be the foreign contingent that decide the final."

"If we do end up winning, then someone on our side will pick up the Harry Sunderland trophy and I have a chance of doing that.

"But it has been a great year for me. I haven't surprised myself at how well I have done because I knew I had it in me."

The Merseyside-born 26-year-old already has experience of playing in a Grand Final in 2010, but it was not a good one as his St Helens side were beaten 22-10 by his current employees.

"I still think back to the 2010 final and I never want to feel that pain again, what I felt at the final whistle," said Smith.

"Walking out in front of 80,000 people, the best moment of your career, to the worst moment when you get beaten.

"It was awful but they say you have to lose one to win one so hopefully that will be the case for me on Saturday."

Smith - a former Everton trainee - has predicted a close contest at Old Trafford and feels it will be a showpiece occasion that will live long in the memory.

"It is hard to split the two sides. Both are fantastic, attacking teams that are able to strike from anywhere on the pitch," he added.

"Both are great defensively too and have a first-class kicking game so I think it will be one of the best finals ever."