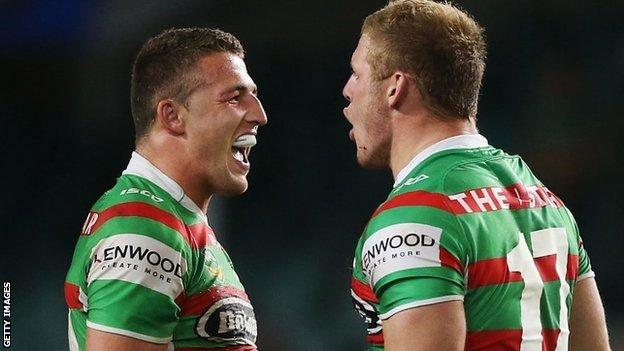 Steve McNamara has brought together the best available English talent in Super League and Australia's NRL in a 24-man squad he insists can win the World Cup.

The head coach told me at the start of the summer that the key to gauging the strength of his squad would be the number of top players he leaves out.

And having disappointed an array of in-form Super League talent with the announcement of his squad on Tuesday, McNamara will be confident he has got the balance right. So has he?

In terms of those players who have made it, the headlines focus on three of the four Burgess brothers - Sam, George and Tom. In the words of captain Kevin Sinfield, they have been "tearing up trees" for South Sydney.

The question was always how many of the four Australia-based brothers from Dewsbury would be named, and - with George and Tom poised for debuts - whose places they would take in the squad.

Sam and George were certainties. Sam has become one of the hottest forwards in the NRL and George's stunning debut season has seen him named rookie of the year.

Tom is selected ahead of the unfortunate Huddersfield prop Eorl Crabtree who - alongside another big-name absentee in St Helens Jon Wilkin - has been involved in much of the team's publicity drive ahead of the tournament.

While Tom has played only 322 minutes in his debut season in Australia, he has obviously convinced McNamara he is a better option.

This marks something of a shift in philosophy from the coach, who has often talked of picking on "long-term form". McNamara admits his World Cup squad is now "based on performance and potential to win the competition".

Knowing full well what Crabtree, Wilkin and the 36-year-old legs of veteran Adrian Morley can do, McNamara has decided that the best chance of winning the World Cup is in the raw potential offered by the international debutant twins George and Tom. Morley's international career looks over.

This is a squad that excites me. There is pace and fantastic finishing potential

Has McNamara got it right? I think so. As much as I feel for Crabtree, I believe the England pack will be as strong as any in the tournament. Indeed the whole squad's strength reassures me as they head into battle with the most brutal players in the world.

What does concern me, though, is the inclusion of players with injuries. Clearly Leeds's Kallum Watkins, Wigan's Sean O'Loughlin and Melbourne Storm's Gareth Widdop are big names on the McNamara team sheet, but in a squad of 24 players, all three have to be 100% right.

Influential Wigan captain O'Loughlin hasn't played for a month and was hobbling around the corridors of the DW Stadium in a protective boot last Friday night as his team defeated Leeds in the Super League play-offs.

Rhinos centre Watkins could hardly run in that match, while Widdop's return from an horrific hip dislocation is remarkable.

All three of these players are match-winners. But given the doubts over their fitness, I was a little surprised not to see Warrington's versatile Stefan Ratchford in the squad.

St Helens James Roby was always going to be the first-choice hooker but Huddersfield's Shaun Lunt certainly gave McNamara a tough decision in terms of who would also be selected in that position.

Wigan's Michael McIlorum has got the nod and his ultra-competitive streak could prove useful in unsettling Australia and New Zealand. He will walk a disciplinary tightrope, as will Widnes's Gareth Hock, though McNamara is confident neither player will let him down.

It is the half-back selections that prompt most debate.

If England do come up short, then McNamara may ultimately be judged over his stance on Danny Brough.

Huddersfield Giants' newly-crowned Man of Steel opted to snub England and play for Scotland back in June. His fall-out with McNamara deprives England of the best half-back in the competition.

Richie Myler's knee injury came at the wrong time and neither the Warrington scrum-half nor Wigan's Lance Todd trophy winner Matty Smith are able to displace Leeds' Rob Burrow in the squad.

McNamara will again put his faith in Salford-bound Rangi Chase alongside captain Sinfield and the fluidity of that partnership will be absolutely key.

It is a squad that excites me. There is pace and fantastic finishing potential in Super League's top try scorer Josh Charnley and in Ryan Hall, with the Leeds-bound Tom Briscoe as back up.

If Watkins' injury concerns persist, then the squad does look a little light in the centres, although Zak Hardaker, Widdop and Carl Ablett provide other options behind Huddersfield's Leroy Cudjoe.

McNamara has thick skin - he can deal with the constant questioning from fans as to why their own club's players aren't included.

But it is time to support and focus on the 24 names in the squad, not on those who are not.

Former New Zealand international Robbie Hunter-Paul put it best last week when he told me England can win the competition if they learn to "strut a bit more".

It is a squad that needs to swagger, and believe that it can go the distance.