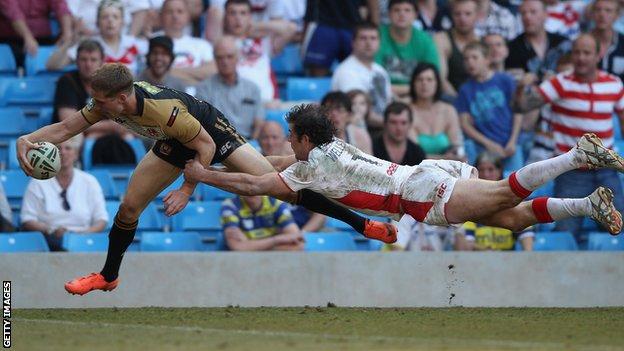 Sam Tomkins will play in his 152nd and last game for Wigan in the Grand Final against Warrington on Saturday, hoping to add one more memorable moment at the end of a sparkling Super League career.

after the upcoming World Cup, at which the full-back will be

BBC Sport analyses his time with Wigan, his upcoming move to the NRL and asks whether he can sign off in style at Old Trafford.

Why is Tomkins leaving Wigan?

Sam Tomkins: "It will be tough to leave this place. I've got very happy memories of playing for Wigan Warriors.

"Timing-wise, it was the right time to go for me. I'm 24, I've got a lot of rugby left in me and my best years are to come hopefully. I want to do them in the toughest competition, which is the NRL.

"It's going to be a big task, but it's something I feel I'm ready for. Moving 12,000 miles away from friends and family will be tough but I think I'm ready. It won't be easy, but nothing worth having ever is."

Is it the right time for him to leave?

Wigan Warriors chairman Ian Lenagan: "He's won just about everything in the game - two Challenge Cups, two League Leaders' Shields, a Grand Final, the young player of the year award and the

"He's decided the time is right for him and we accepted, with reluctance, that there was an inevitability he would go.

"When motivation for Sam is very much the challenge, I can understand another year of coming back to Wembley again or getting to the Grand Final might not be the same motivation as proving it on the other side of the world.

"Do I think that, when he's done everything that can be done in the NRL, that he'll come back here? I think he will come back."

How will he do in the NRL?

Wigan Warriors coach Shaun Wane: "He'll kill it. He might not straight away, but once he settles in, they're getting a great player.

"He's a quality player. His main strength is that he's a competitor and he wants to win. That makes him the player he is.

"The culture at Wigan is very strict and honest and he'll take that over there. He's not afraid to stand up for himself and deliver what he wants to be said.

What makes him so special?

Salford coach Brian Noble, who gave Tomkins his Wigan Warriors debut in 2008: "It was always evident that he was going to be a top-class player. On his debut, he scored five tries against Whitehaven.

"Michael Maguire [Noble's successor at Wigan] made him a more stable player and gave him a fixed position at full-back and that really helped him.

"He's fulfilled his promise. So many players don't, but he has. He'll do a great job in the NRL when he goes down there. It's the right time and the right challenge for him.

"Whilst Wigan have a Tomkins is a superstar."

Can Super League cope without him?

Warrington coach Tony Smith: "It is inevitable that we will lose some players to the NRL and Sam Tomkins is a quality player.

"The concentration needs to be on all the clubs to find the next Sam Tomkins. We need to develop and find those young players and get some quality back into Super League.

"With Sam leaving, it doesn't mean it is all over for us, it just means the process starts all over again. I hope Sam goes there and represents us strongly like the have done."

How will he be remembered by Wigan fans?

"His try at the Grand Final in 2010 was the moment I felt sure we were back as one of the top clubs. It was a huge moment for us and it seemed fitting he scored the try that, in my mind, really sealed the result.

"In the last few years, nothing has matched the excitement of watching Sam ghost into the attacking line late from full-back, more often than not squeezing through a Tomkins-sized hole in the opposition defence.

"I love the fact he loves Wigan and perhaps more importantly our sport. He will be a huge loss.

"I've got everything crossed that he finishes his time in a cherry and white jersey with a bit of magic on Saturday, and wouldn't it be amazing if he could take some World Cup bragging rights with him down under as well?

Will he finish with a Grand Final win?

BBC Radio Manchester's Jack Dearden: "I'm so pleased it's a Wigan-Warrington final and it could turn out to be the best Grand Final since the introduction of the play-offs.

"I think Warrington will go in as slight favourites. They've had an extra day's rest, while and you could tell that game had taken a lot out of them.

"My head says Warrington - I think they've got the edge in certain positions and have recent experience of a Grand Final.

"But my heart says Wigan. I'm expecting a close game and it could come down to one piece of brilliance from one player.

"Other players, such as Warrington's Stefan Ratchford, have the ability to do that.

"But if that is the case, who better than Sam Tomkins, the man with the X-factor in rugby league and a player who will be determined to end on a high, to provide it?"